Prophecies Made in the Quran That Have Already Come True 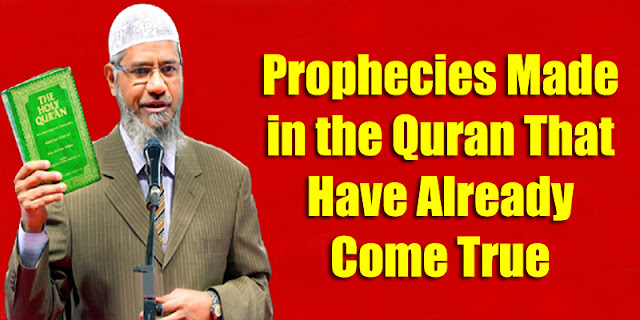 There are some things which Allah mentioned in the Quran which were yet to come, and which did in fact happen. These include the following :

1 – The defeat of the Persians by the Romans within a number of years.

“The Romans have been defeated.

In the nearest land (Syria, Iraq, Jordan, and Palestine), and they, after their defeat, will be victorious.

Al-Zajjaaj said: This is one of the verses that prove that the Quran is from Allah, because it is foretelling something that was yet to come, and this is something which no one could know except Allah.

2 – Enmity among the Christian sects until the Day of Resurrection:

“And from those who call themselves Christians, We took their covenant, but they have abandoned a good part of the Message that was sent to them. So We planted amongst them enmity and hatred till the Day of Resurrection (when they discarded Allah’s Book, disobeyed Allah’s Messengers and His Orders and transgressed beyond bounds in Allah’s disobedience); and Allah will inform them of what they used to do”

“So We planted amongst them enmity and hatred till the Day of Resurrection” means, We sowed amongst them enmity and hatred of one another, and they will remain like that until the Hour begins. Hence the Christian groups, no matter what their types, will continue to hate one another and denounce one another as disbelievers and curse one another. So each group forbids the others to come to its place of worship, and the Byzantines denounced the Jacobites as disbelievers, and the Nestorians denounced the Arians, and so on. Each group denounces the others as disbelievers in this world and will do so on the Day of Judgement.

3 – Allah promised His Prophet (peace and blessings of Allah be upon him) that his religion would prevail over all others.

“It is He Who has sent His Messenger (Muhammad) with guidance and the religion of truth (Islam), to make it superior over all religions”

Allah indeed did that. Whenever Abu Bakr (may Allah be pleased with him) sent his armies out on a campaign, he would remind them of what Allah had promised them, that He would cause His religion to prevail, so that they would be confident of victory and certain of success. ‘Umar used to do likewise, and their conquests continued east and west, by land and sea.

4 – The conquest of Makkah

“Indeed Allah shall fulfill the true vision which He showed to His Messenger [i.e. the Prophet saw a dream that he has entered Makkah along with his Companions, having their (head) hair shaved and cut short] in very truth. Certainly, you shall enter Al‑Masjid Al‑Haraam, if Allah wills, secure, (some) having your heads shaved, and (some) having your head hair cut short, having no fear. He knew what you knew not, and He granted besides that a near victory”

Allah says: Allah is confirming as true the vision which He showed to His Messenger Muhammad (peace and blessings of Allah be upon him), that he and his companions would enter the sacred House of Allah in very truth, not fearing the mushrikeen, some of them having their heads shaved and some of them with their hair cut short.

The scholars of tafseer said something similar to that which we have said.

“And (remember) when Allah promised you (Muslims) one of the two parties (of the enemy, i.e. either the army or the caravan) that it should be yours; you wished that the one not armed (the caravan) should be yours, but Allah willed to justify the truth by His Words and to cut off the roots of the disbelievers (i.e. in the battle of Badr)”

What this means is: Remember when Allah promised you one of the two parties. The two parties were: Abu Sufyaan and the wealth that was with him, and Abu Jahl and the people of Quraysh who were with him. When Abu Sufyaan went ahead with the wealth that was with him, he wrote to Quraysh saying, if you have already gone out to save your caravan, I have already saved it for you (i.e., so go back). Abu Jahl said, By Allah, we will not go back. Then the Messenger of Allah (peace and blessings of Allah be upon him) set out, heading for the people (i.e., to confront the kaafir army), but his companions were not happy about that, wishing that they had caught up with the group from whom they could capture the booty without fighting. Hence Allah said “you wished that the one not armed (the caravan) should be yours”.