Self Confidence – A Key to Success in a Muslim’s Life 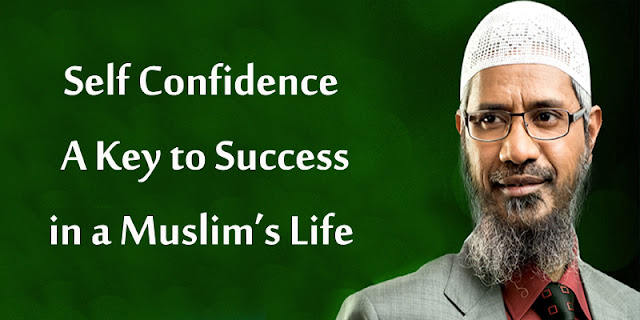 Do you have a hard time giving da’wah (religious advice) to people?

Most of us do.

We know very well that we should share beneficial knowledge, that we will be questioned about seeing people doing things wrong and not correcting them.

Why then can’t we do it?

That’s just one disadvantage of not having enough self-confidence. A lack of self-confidence can cause havoc in people’s lives. From your job to your marriage, from your worship to your parenting – it affects all areas of your life. It’s a powerful weapon of Satan in his fight to deviate us from the Straight Path.

Although often used synonymously, self-confidence and self-esteem are two different concepts. Esteem is about honoring, valuing, respecting, loving and taking care of.

People with a high self-esteem never seriously consider harming themselves unnecessarily, whereas suicide is linked to low self-esteem. If someone doesn’t respect himself enough, his life has little value to him.

Self-confidence, on the other hand, is about trust, faith and reliance. When you are confident about accomplishing a particular task, you have complete reliance on your ability to do it.


Identify Your Areas of Low Self-Confidence

Self-confidence varies a lot from person to person; it even varies within a single person. You can be self-confident in some areas of life and not in others. For example, someone might be very confident about their cooking skills but not so much about how they look.

It all depends on our life experiences. A child who is repeatedly scolded by teachers and parents for not being good at studies, and mocked at for not understanding a concept as quickly as his peers, will probably end up having low self-confidence in academics for the rest of his life.

Many people distrust their ability to speak coherently in front of a crowd, hence the common anxiety of public speaking. Others lack confidence in their communication skills, sometimes ending up with social phobia.

Contrary to what some people believe, self-confidence and tawakkul aren’t contradictory concepts. Having trust in yourself doesn’t mean you don’t have trust in Allah, and vice versa. In fact, tawakkul is actually the source of true healthy self-confidence. How so? Let me explain.

How does a child develop the confidence to walk? First, the mother helps the child to stand up holding her hands. Then she lets go, moves a few steps back and calls the child to come to her. The child is unsure at first whether he can make it or not, but his mother’s smile gives him confidence.

If the child didn’t trust his mother, he’d probably learn walking very much later in life.

There’s a wonderful experiment in child psychology called the Visual Cliff. The baby is placed on a table, half of which is sunk but has a glass top.

On the other side of the table his mom is standing, and also a toy is waiting for him. The baby can safely cross the table to the other side, but he doesn’t know this. All he can see is that he’s sitting on a cliff with a steep dive halfway down the table.

Does the baby cross across to get his toy? It all depends on his confidence on his mother. If she’s looking encouraging, he will typically cross over. If, on the other hand, she looks fearful, he won’t.

Would you be willing the jump off a cliff if Allah told you to?

Tawakkul is having confidence in Allah. Now, Allah says in the Quran that you will be a loser unless you advise others to the truth (103:1-3). He has also said that He won’t give you a task that’s beyond your capacity (2:286). Do you have confidence in Allah?

If you have tawakkul in Allah, you will overcome your shyness and talk to people about Allah. And the more you do so, the more your tawakkul will increase, and so will your self-confidence.