How to Find Peace through Prayer? 3 Powerful Triggers 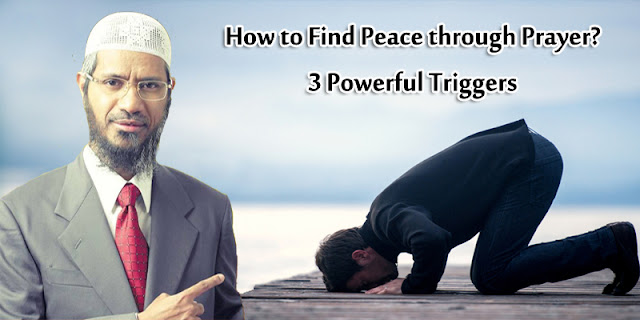 You may have heard that prayer (salah) brings about peace and tranquility in a person. The notion actually comes from the Quran:

Unquestionably, by the remembrance of Allah hearts find rest (Quran 13:28)

But, how many people actually experience it? For those who haven’t, what can they do to feel this peace?

The prayer (salah) is often mistakenly seen as a monologue or a chant with certain postures performed to complete a ritual. The idea that it is a real conversation between the human and the Creator of the universe often gets lost in the rush to complete the prayer.

By no means would a rushed prayer bring about peace and tranquility. It may, however, give the worshiper the sense that an obligation has been fulfilled, perhaps like checking off an item on a to-do list.

A man in the time of the Prophet seemed to have a similar feeling when he rushed his prayer. The Prophet told him:

Go back and pray, for you have not prayed.

The man went back and prayed as he had prayed before, then he came to the Prophet and greeted him. And the Messenger of Allah said:

“And peace be upon you.”

“Go back and pray, for you have not prayed.”

When he had done that three times, the man said:

“By the One Who sent you with the truth, I cannot do more than that. Teach me.”

Three important triggers in the prayer will do the job. These three triggers are not just fundamental for salah, but for any act of worship. It may sound complicated, but it really isn’t.

Experiencing love brings about the feeling of happiness. Happiness, in turn, makes one feel secure and peaceful. The trigger for love exists very early on in prayer. When the worshiper says in prayer, “Al-Hamdu lilahi rabil’Alamin” (All perfection and praises are for Allah, the Lord of the worlds), this trigger activates the feeling of love.

Allah who is perfect in His sayings, actions, and judgments never wrongs a soul. There’s no fear on the part of the worshiper of harm or loss that could come from Allah. Add to that the countless bounties of Allah upon humans, here are some macro ones:

Have those who disbelieved not considered that the heavens and the earth were a joined entity, and We separated them and made from water every living thing? Then will they not believe? And We placed within the earth firmly set mountains, lest it should shift with them, and We made therein [mountain] passes [as] roads that they might be guided…

Indebted to a Creator who wrongs not an atom and who showers His creation with blessings, only brings about the feeling of love for Him. Love is the first triggered emotion and for good reason. It serves as the foundational emotion that warrants other actions and emotions.

The worshiper continues in prayer to say:

The Most Merciful, the Bestower of Mercy.

The worshiper’s recognition and proclamation that Allah is Merciful triggers the emotion of hope. The feeling of hope, in turn, repels the feeling of despair and brings about a state of peace.

No matter what calamity has befallen in a person’s life, there is always hope because Allah, by His Mercy, will bring about ease after the difficulty.

Some prisoners of war were brought in front of the Prophet, and a woman was among them who was nursing. Whenever she found a child, she would take it to her chest and nurse it. The Prophet said to us:

Do you think this woman could throw her child in the fire?

Allah is more merciful to His worshipers than a mother is to her child. (Al-Bukhari)

Hope is an emotion that if it is not kept in check, it could become irrational. Irrational hope could remove the sense of responsibility and accountability. A person not making an effort to obtain an education or to feed the family could use irrational hope as an excuse by saying, “Allah is the Most Merciful, He will provide for me. I do not need an education or a job.” To keep this in check, the next trigger activates the feeling of fear– the fear of falling short and having to bear its consequences.

The Owner of the Day of Judgment.

Recognizing that Allah will judge the worshiper creates a sense of accountability that is unique to Him, the One who knows the unseen and the seen. There can be no sin or defraudation kept hidden from Him. The feeling of fear brings about peace because the person is prevented from living a carefree life which can only prove to become hazardous.

Love, hope, and fear combined with a prayer enters a person into a state of peace. By performing the prayer as a conversation and pondering over the meanings of its words the worshiper is bound to come across these triggers that evoke emotion.

This is how one would long for and become attached to prayer ensuring a life filled with peace and tranquility.