Feeling Ignored by Others? Here are 6 Cures 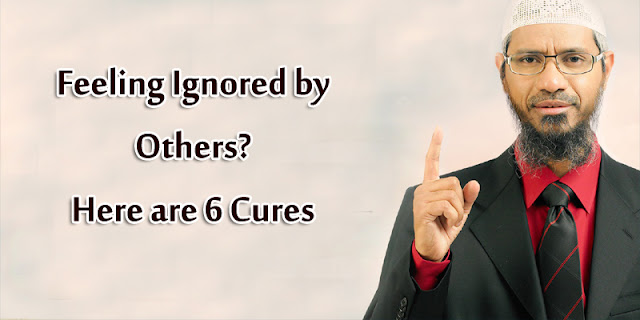 Feeling Ignored by Others? Here are 6 Cures!

1- Regarding the issue of feeling ignored by others and thinking too much about their opinion, as long as we put people’s opinions and the worldly matters as our main goal and focus, we’ll continue to feel a sense of deprivation. The Prophet [saw] said:

“Whoever is focused only on this world, Allah will confound his affairs and make him fear poverty constantly, and he will not get anything of this world except that which has been decreed for him. Whoever is focused on the Hereafter, Allah will settle his affairs for him and make him feel content with his loss, and his provision and worldly gains will undoubtedly come to him.” [Sunan Ibn Majah]

Only Allah is The One free of need, and He is the Provider and Controller of hearts who can fill the hearts with peace and contentment, not the people.

2- If you want to feel loved, do what Allah loves. Allah Almighty says:

“Indeed, those who have believed and done righteous deeds – the Most Merciful will appoint for them affection.” (Quran 19:96)

So focus on loving Allah Himself and being genuine and sincere to Him, and He will appoint for you affection in the hearts of the good people.

You can also make the comprehensive and beautiful dua that the Prophet taught us:

(O Allah! I ask You for Your Love, the love of those who love You, and deeds which will cause me to attain Your Love. O Allah! Make Your Love dearer to me than myself, my family and the cold water)

Abu Hurairah (may Allah be pleased with him) narrated that the Messenger of Allah (pbuh) said:

“Sadaqah does not decrease property and Allah increases the honor of him who forgives and no one will humble himself for Allah’s sake except that Allah raises his status.” [Related by Muslim].

The Prophet used to sit among his companions humbly to the extent that a strange person will not know who among them is the Messenger of Allah. Anas b. Malik reported:

a man entered the mosque on a camel and made it kneel down, and then tied his leg with rope. He then asked: Who among you is Muhammad?” [Sunan Abi Dawud]

Also, the Prophet [saw] refused to be overly praised and when some people used to exalt him, he would refer them to exalting only Allah and focusing their speech with him on what matters without excessiveness. Narrated Abdullah ibn ash-Shikhkhir:

I went with a deputation of Banu Amir to the apostle of Allah (pbuh), and we said: You are our lord (sayyid). To this, he replied: The lord is Allah, the Blessed, and Exalted. Then we said: And the one of us most endowed with excellence and superiority. To this, he replied: Say what you have to say, or part of what you have to say, and do not let the devil make you his agents. [Sunan Ab Dawud]

5- In regards to being jealous of other people and hating them if they’re successful, it’s important to know that Satan and the nafs (lower self) provoke these feelings of jealousy and hatred. So seek refuge in Allah from Satan whenever this happens and remember two things:

A- Envy will only result in you losing your hasanat, as the Prophet [saw] said:

“Beware of envy because envy consumes (destroys) the virtues just as the fire consumes the firewood,” or he said “grass”. [Abu Dawud].

B- Without any need for envy, you can get what the other people have or even more by supplicating for them behind their backs. The Prophet [saw]

“Whenever a Muslim supplicates for his (Muslim) brother in his absence, the angels say: ‘May the same be for you too’.” [Muslim].

6- Finally, regarding being afraid to speak in front of people, do not feel tempted to speak in the first place unless you do have something important to say. And before you speak, you can make the dua that Prophet Musa (peace be upon him) made before speaking to Pharaoh and his people. He said,

“My Lord, expand for me my breast [with assurance], and ease for me my task, and untie the knot from my tongue, that they may understand my speech.” (Quran 20: 25-28)