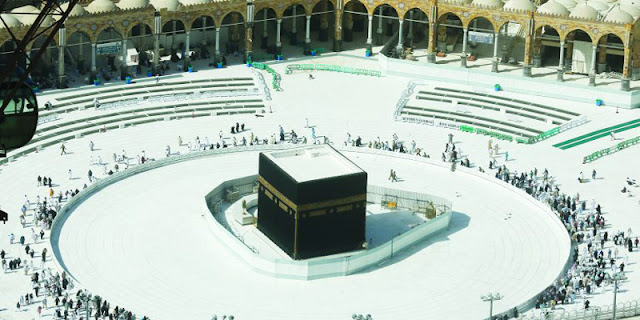 As COVID-19 pandemic cases surge across the world, Saudi Arabia issued health protocols on Monday to protect those going to the upcoming Hajj pilgrimage.

The restrictions announced by the kingdom’s Center for Disease Prevention and Control (Weqaya) are designed to prevent the spread of the coronavirus, Arab News reported.

The safety measures announced include:

◉ Wearing of masks at all times, at all sites;

◉ Maintaining the social distance of at least a meter and a half between each pilgrim;

◉ Banning of touching or kissing the Ka`bah;

◉ Using only provided previously sterilized stones for the Jamarat (stoning the devil) ritual that will be performed with only 50 pilgrims at a time;

◉ Limiting of no more than 10 pilgrims to the 50 square meters of space allocated for tents;

◉ No personnel, guides, pilgrims and workers are allowed to work if they contract flu-like symptoms;

◉ Water coolers will be discontinued in the Grand Mosque and holy sites.

◉ Individual bottled Zamzam water will be available and distributed to pilgrims at all times;

◉ Individual pre-packaged meals and food will be served to pilgrims;

◉ Sanitizers must be placed next to ATMs, touch-screen guides, and vending machines

Access to Mina, Muzdalifah, and Arafat will be limited to those with hajj permits starting 19 July till 2 August.

The new protocols are also related to the use of residential buildings, food places, buses, and men’s barber shops, as well as with regard to Arafa and Muzdalifah, throwing stones (Jamarat), and prayers at the Grand Mosque of Makkah.

Saudi Health Minister Dr. Tawfiq Al-Rabiah announced earlier last month that the number of pilgrims would be limited this year.

Millions of Muslims normally make the pilgrimage to Makkah every year, with nearly 2.5 million doing so in 2019.

Hajj ceremonies symbolize the essential concepts of the Islamic faith. It commemorates the trials of Prophet Abraham and his family.

Every able-bodied adult Muslim who can financially afford the trip must perform Hajj at least once in a lifetime.