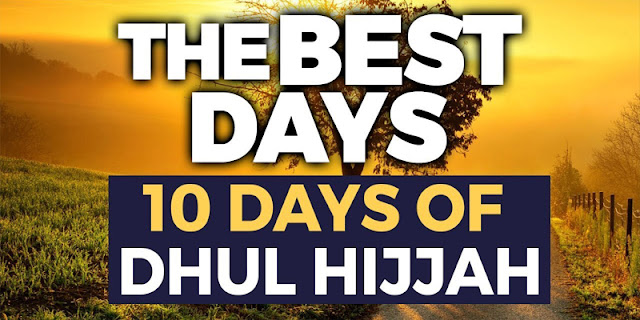 Do you feel you could have done more in that blessed month? Are you disappointed with your performance during the last ten days of Ramadan and feel an overwhelming yearning for the spirituality of Laylat Al-Qadr?

Well, you have another chance!

It is out of Allah’s mercy that He bestows upon us blessed times in which rewards are multiplied. These seasons of goodness recur time after time, so that we can recharge our spiritual batteries and keep our hearts alive. Nowadays, we are witnessing one of them — the first 10 days of Dhul-Hijjah.

You certainly must have read or heard about the greatness of these days and the indescribable amount of forgiveness and mercy that Allah bestows upon people during them.

Now that these days are here, it is time for deeds, not words.

The intelligent person is one who takes full advantage of every minute and every second, and this is not so difficult. There are many ways to achieve goodness, and with little effort you can get much reward.

1. Hajj: The Fifth Pillar of Islam

Sadly, over 99% of Muslims will not be able to observe Hajj this year due to the Hajj Ban.

But if you are one of the few lucky Muslims who are going to observe it this year, then try your best to gain as much reward as possible. This is your real chance to become wholly absolved of your sins and have your record wiped clean.

So spare no effort in perfecting your rituals, and keep away from anything that may blemish your Hajj. During the journey, make use of your time through constant supplication, remembrance of Allah, and recitation of the Qur’an. Who knows, this may be your last journey to the Sacred House.

2. Reward of Hajj in Your Homeland

You may be unable to do Hajj this year, and you may feel sad because you are deprived of the great reward of Hajj. But you can also achieve this reward in your country of residence. Just reflect on the following hadith:

Whoever prays Fajr Prayer in congregation, and then sits and remembers Allah until the sun rises, then (after a while) prays tworak`has, he will gain a reward equal to that of making perfect Hajj and `Umrah. [The Prophet repeated the word “perfect” thrice.] (At-Tirmidhi)

It is time also to dust off your copy of the Qur’an and return to its refuge.

Make these 10 days the beginning of a systematic and strong relationship with it.

Reading one letter of the Qur’an earns you 10 rewards. In this way, reading Surat Al-Fatihah — which doesn’t take more than two minutes — will give you more than one thousand rewards. This is on ordinary days, so what about these great days! Certainly the reward will be far greater.

Furthermore, there are some surahs that have special merits. Reading Surat Al-Ikhlas (surah 112), for example, is equal to reading one third of the Qur’an (Al-Bukhari and Muslim).

Regular recitation of Surat Al-Mulk (surah 67) intercedes for its reader (Abu Dawud), and reading Ayat Al-Kursi (Al-Baqarah 2:255) when going to sleep protects you from Satan for the whole night (Al-Bukhari).

4. Fasting: Evoking the Spirit of Ramadan

It is a good idea to evoke the spirituality of Ramadan by fasting during these blessed days. Remember that observing the voluntary fast for day keeps you away from Hell. In a hadith, the Prophet (peace and blessings be upon him) said,

Anyone who fasts for one day for Allah’s pleasure, Allah will keep his face away from the (Hell) fire for (a distance covered by a journey of) seventy years. (Al-Bukhari and Muslim)

This is during ordinary days. Of course there is even more reward during these blessed days.

On the day of `Arafah, Allah showers His mercy on the pilgrims and forgives all their sins. If you are not a pilgrim, you still can have a share of this forgiveness. All you have to do is to fast on the Day of `Arafah, and by doing that, Allah will forgive your sins for two whole years — the past year and the coming one.

You always hear about the virtues of spending night in prayer, and you have actually tasted its sweetness in Ramadan nights. Why not revive this beautiful act of worship during these nights?

You can add two or four extra rak`has after finishing `Isha’ Prayer and before Witr Prayer. In addition to that, there is another easy way to gain the reward of the night vigil prayer.

It is reported that the Prophet (peace and blessings be upon him) said:

This is one of the easiest ways to gain treasures of reward. You can make dhikr wherever you are, at all times.

You can make dhikr at your home, school, or workplace, and you can make it while you are driving, walking, traveling, and commuting. In addition, the Prophet (peace and blessings be upon him) gave us guidance for reciting certain formulas of dhikr that have special reward.

For example, Abu Hurairah (may Allah be pleased with him) reported that the Prophet (peace and blessings be upon him) said:

He who recites after every prayer:

and completes the hundred with:

La ilaha illallahu, wahdahu la sharika lahu, lahul-mulku wa lahul-hamdu, wa Huwa `ala kulli shai’in qadir (there is no true god except Allah. He is One and He has no partner. His is the sovereignty and His is the praise, and He is Omnipotent),

will have all his sins pardoned even if they may be as large as the foam on the surface of the sea. (Muslim)

Abu Hurairah (may Allah be pleased with him) also reported that the Prophet (peace and blessings be upon him) said:

He who says Subhan-Allahi wa bihamdihi (Allah is free from imperfection and His is the praise) one hundred times a day, his sins will be obliterated even if they are equal to the extent of the foam of the sea.(Al-Bukhari and Muslim)

Abu Ayyub Al-Ansari (may Allah be pleased with him) reported that the Prophet (peace and blessings be upon him) said:

(There is no true god except Allah. He is One and He has no partner. His is the sovereignty and His is the praise, and He is Omnipotent),

he will have a reward equal to that for freeing four slaves from the progeny of Prophet Isma`il. (Al-Bukhari and Muslim)

In a wonderful hadith, the Prophet (peace and blessings be upon him) said that on the last third of every night, Allah Almighty calls to His servants:

Is there anyone to invoke Me, so that I may respond to his invocation?

Anyone to ask Me, so that I may grant him his request?

Is there anyone seeking My forgiveness, so that I may forgive him? (Al-Bukhari and Muslim)

Why do we miss this golden opportunity?

Now is the right time to expose yourself to His divine generosity and mercy.

If you are going to fast during these days, you are most likely to wake up a little bit earlier than usual to have your sahur.

So, seize the opportunity and pray two rak`ahs, and ask Allah to forgive your sins and to grant you happiness in this world and in the hereafter. Do not forget your brothers and sisters who suffer in Palestine, Iraq, Myanmar, and other countries.

The doors of goodness are numerous and wide open. There are many ways to Paradise, and the more time and effort you give, the more reward and blessings you will get.