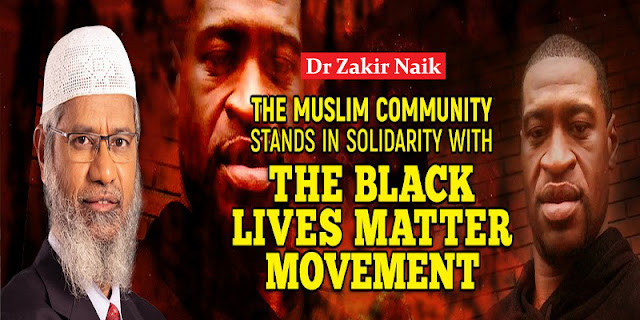 To our black brothers and sisters in America and worldwide, who are angry and grieving and fighting for their rights, we are with you. Your struggle is a struggle we should all be a part of.

As Muslims, we should know that our fight for justice is meaningless if it does not call for an end to oppression for people of all faiths and races. Allaah tells us in the Qur’aan, “O humankind! We created you from a single (pair) of a male and a female, and made you into nations and tribes, that ye may know each other (not that you may despise each other). Verily the most honoured of you in the sight of Allaah is (he who is) the most righteous of you.” (Al Qur’aan 49:13)

The Qur’aanic verses and the sayings of the Prophet (pbuh) have taught us the importance of equality between people of all nations and colours. That race is no factor in determining a person’s worth, and that we must defend those that are persecuted because of it.

Al Bara’ bin Azid said, “The Prophet ordered us to do seven things … to defend the oppressed.”

On May 25, 2020, George Floyd, a black American, was murdered by a white policeman in Minneapolis, United States. The police officer, Derek Chauvin, pressed his knee into George Floyd’s neck for over eight minutes, even as he pleaded over and over, ‘I can’t breathe.’ Three other white policemen watched, silently, as their comrade slowly killed an innocent man in cold blood.


The shocking cruelty of the police has left us heartbroken, but what pains us even more is that this is not an isolated incident. For decades, black people in America have been marginalized and targeted for nothing other than their skin color.

But bigotry is not just a product of white supremacy. In China, thousands of Uyghur Muslims are being subject to unspeakable torture simply because of their religion. In India, Kashmiris are being rounded up and thrown into prison for crimes they did not commit and barbaric atrocities continue to be committed on the Dalit and lower caste men, women and children across India. In Myanmar, even as we speak, a genocide is taking pace against the Rohingya. In Israel, the crimes against the Palestinians go unchecked, unimpeded and unaccounted for, every day.

The Qur’aan says, “O you who have believed, be persistently standing firm in justice, witnesses for Allaah, even if it be against yourselves or parents and relatives. Whether one is rich or poor, Allaah is more worthy of both. So follow not [personal] inclination, lest you not be just. And if you distort [your testimony] or refuse [to give it], then indeed Allaah is ever, with what you do, Acquainted.” (Al Qur’aan 4:135)

Malcolm X, the great Muslim human rights activist, said, “I’m for truth, no matter who tells it. I’m for justice, no matter who it's for or against.”

George Floyd’s dying words will continue to haunt us. His cries of anguish will be heard each time bigotry rears its ugly head. Let his death not be in vain. Stand up against racism, stand up for injustice, stand with the oppressed. Black lives matter.