Consider Allah When You Sin 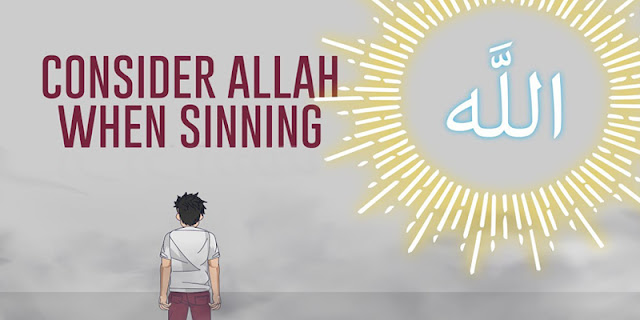 Don’t despair from the mercy of Allah. Why? Because Allah says it right away:

Because Allah is Most Forgiving. He covers your sins and he will forgive them and he will not hold you accountable for them as long as you seek Allah’s forgiveness.

The way Imam Ash-Shafi’I looks at that, he explained that whenever you commit a sin, don’t look at the size of the sin itself, but look at the One you have disobeyed, the Almighty.

It might be a really small sin in its nature, but the attitude that you have with that sin makes it extremely great.

But look at that same person that Imam Ash Shafi’i when he was dying, he calls Allah:


“My Lord, I have brought with me to this moment, to this interview with You, many sins; I’m covered in sins, I have mountains of sins…”

Do you ever hear about Ash-Shafi’i backbiting, doing anything lewd? Can you ever find a sin of Ash-Shafi’i… But he’s saying, “Ya Allah! I have many sins.” Because of how he considers Allah. But he said:

“When I looked at Your mercy, I recognized that a little bit of Your mercy is all that I need to forgive lot of my sins.”

Those were his last words.

Look at the way Salih ibn Qaysam when he described Umar ibn abd al-Aziz to his father. He said:

“I’ve never seen anyone to whom Allah’s mean more, like Allah is greater in his chest than that young man, Umar ibn abd al-Aziz.”

Your thinking of Allah, your fear of the size of that sin, that attitude that you have when you commit that sin represents how you feel about God; and that’s really what this is all about.

Think about it! Allah forgives this man that kills a hundred people, the last of them being a worshiper. How many lives were destroyed by his murder of the other 99 people? But the fact that the man considered Allah as great, feared the consequences of a sin, was willing to just make a move to another land to start over and counted on the mercy of Allah, that murder of hundred people became insignificant to Allah.


Whereas you take a small sin but you don’t care about it, you’re consistently committing that same sin over and over again, Prophet Muhammad said:

Beware of belittling your sins.

The Prophet gave the example of someone that consistently throwing small pieces of wood into a fire until eventually the fire gets so big that it consumes you.

“Take the biggest stone but keep on dropping a small drip of water on the same spot over and over again, eventually the stone will erode.”

Belittling sins, the attitude that you have with that small sin, that is offensive to Allah; that you have reduced Allah to the lowest of your observers.