Allah Wishes Ease For You 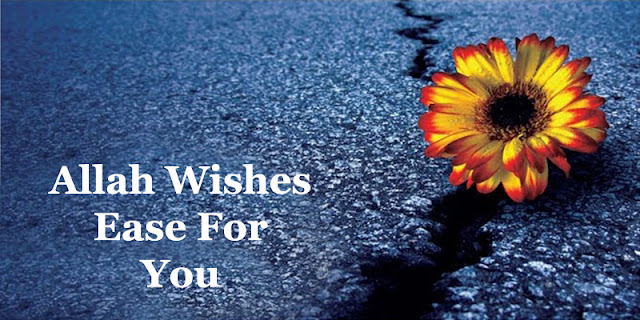 There is a very beautiful verse in Surat Al-Baqarah that I wanted to comment on today.

…Allah intends for you ease and does not intend for you hardship… (2:185)

This verse is one of the over-arching, over-riding principles of our religion.

The Quran mentions this point in half a dozen verses, and our Prophet (peace be upon him) explicitly stated it.

So Allah wants to make things easy, He does not want to place difficulty.

2- In Surat Al-A’raf, (in verse 7:157), we read that the prophet, peace be upon him, has been sent so that he commands people to good and he forbids them what is evil.

And eventually He says that the Prophet (peace be upon him) removes the burdens and removes the chains that were on them.

…He has chosen you and has not placed upon you in the religion any difficulty… (22:78)

Allah does not charge a soul except [with that within] its capacity… (2:286)

And Allah wants to lighten for you [your difficulties]… (4:28)

And that is why one of the five main principles of Islamic fiqh is difficulty begets ease.

So the more difficult things become, the more easy the Shari’ah becomes.

If you can’t pray standing up, pray sitting down.

If you cannot fast when you are sick, don’t fast on those days…

And a million and one examples coming from the Shari’ah.

The prophet (peace be upon him) mentions in so many hadiths about the ease of this religion.

The most blessed of your religion is the easiest of it.

And Aishah (may Allah be pleased with her) said that:

The Prophet never had two choices except that he chose the easier of them, as long as the Shari’ah was not infringed, and there was no haram done.

Someone may say, how can the religion be easy when we have to wake up for fajr, and that is difficult?

When we have to fast in the summer months, and that is painful?

How can the religion be easy when we are depriving ourselves from 16-17 hours of eating and drinking in the month of June?

How is that easy when we face difficulty?


And the response is there are two types of difficulty.

The first category is that which is uncomfortable, but bearable.

That type of burden is a test from Allah, to sift the good from the bad.

And that is something that the Shari’ah might have partially.

However, even if it has it, the rewards that come are more than the difficulties you put in.

The ease that will come from these minor difficulties will be much more than the pain that you put in.

Allah does not intend to make difficulty for you

The second category of difficulty, is that which is unbearable and unreasonable.

It is this category that the Quran has negated. It does not exist in Islam.

In a beautiful hadith, the Prophet (peace be upon him) said:

You can’t beat the religion.

If you become fanatic, if you become overly-religious beyond what the Shari’ah wants you, if you make the halal haram, if you think you can do more than what the Prophet (peace be upon him) did, that fanaticism will destroy you…

So the prophet warned against extremism and fanaticism…

be firm, be moderate and be sincere.

This religion is easy … No difficulty is in it…

And Allah wants to make things easy for us, so be moderate and do what you can and be persistent and you will get to the end, as the Prophet (peace be upon him) said.