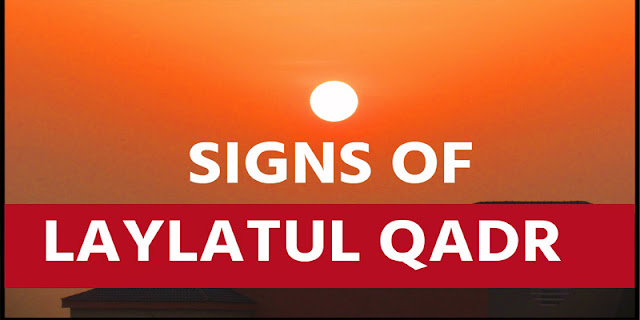 The Night of Decree (Laylatul-Qadr) was mentioned in the Quran in chapter 97:1-5:

So we know that this night is better than a thousand months. What does that really mean?

This is why a lot of Muslims stay up very late at night during the last 10 nights of Ramadan and try to seek this night so that they can have that kind of reward.

Some of the things Muslims do during that night is they:

– Recite the Quran because the Quran was sent down in the Night of the Decree.

– Making plenty of du’a and there is actually a specific du’a that was taught by Prophet Muhammad (peace be upon him) to his wife Aisha:

“O messenger of Allah. What do you think I should say in my supplication if I come upon Laylatul Qadr?”

(O Allah You are forgiving and love forgiveness so forgive me.) (Ibn Majah)

Peace it is until the emergence of dawn.

So we’re looking for a night that is very calm, very peaceful.

Ibn Khuzaymah said that “it is a night that is neither hot nor cold.”

2- THE MOON LOOKS LIKE A PIECE OF A PLATE

Some say it looks like half a plate. (Muslim)

3- IN THE LAST ODD NIGHTS

The scholars said that this is something with wisdom otherwise if you know that is doing to be in the 27th why would you do the acts of worship on any other night.

So basically, Laylatul-Qadr changes from year to year but still in the last ten nights on the odd nights so that the Muslims actually keep working hard for the rewards.


4- THERE IS POSSIBILITY OF RAIN

So there are narrations where Prophet Muhammad (peace be upon him) where he did mention that he dreamed about Laylatul-Qadr and in that dream he had prostrated and when he came up, his face was wet with rain water and mud. (Al-Bukhari, 813)

5- THE SUNRISE FOR THE NEXT MORNING

Narrations say that it is going to be sun with no rays. So that means it’s a very weak sun, you can look straight at it. But the explanation for why, imam An-Nawawi gave us two explanations:

Allah just wants it that way. He wanted the sun to come up in a very special way after a special night.

Because the amount of angels filling the sky, they’re actually blocking the sunbeams.