Story of the Kabah Key Holder and Prophet Muhammad 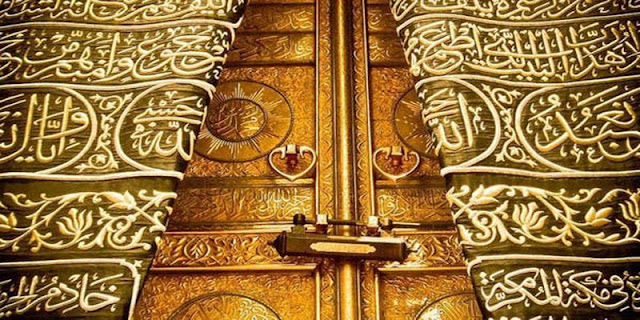 Uthman ibn Talhah was not Muslim at the time. So he locked the doors of the Kabah and he ran right up to the roof and hid there.

So when the Prophet (peace be upon him) entered Makkah, most of the people of Makkah were accepting Islam as he was entering, he asked for the key of the Kabah. The people told him that it is with Uthman ibn Talhah, and they found him on the top of the roof of the Ka’bah.

So Ali told him:

“O Uthman, give us the key. Here is Muhammad (peace be upon him) asking for the key.”

“O Muhammad, if I had believed that you were a Prophet, I would have opened the doors a long time ago.”

What this means is, “I don’t believe that you are a Prophet, so I’m not going to open the door.”

Ali happened to snatch the key from Uthman ibn Talhah and he opened the door of the Ka’bah, and the Prophet entered the Kabah and prayed two raka’hs inside it.

Al-Abbas ibn abd al Muttalib, the uncle of the Prophet Muhammad (peace be upon him) was there and he told the Prophet:

“You know that our family is in charge of pouring water for the pilgrims who come for hajj, so if you hand the key over to us, we will have two points of honor: one is to pour the water and the other is to open and lock the door of the Ka’bah as and when it is necessary.”

A Verse was Revealed

So angel Gabriel came down with a verse inside the Kabah, Subhan Allah:

Allah is commanding you to return the trusts to those whom they belong to. (Quran 4:58)

Which means: “O messenger of God, give the key back to Uthman ibn Talhah.”

So, immediately the Prophet got up and gave the key to Ali and told him:

“Go to Uthman ibn Talhah, return the key and excuse yourself for the manner in which you had snatched the key.”

So Ali went back to Uthman ibn Talhah and told him:

“O Uthman, this is the key, and we are presenting an excuse because we were wrong the way we snatched the key from you.”

“Oh Ali! You a few minutes ago were harming me, you came to me very harshly, and now you are being so humble! What is it?”

“By Allah, o Uthman, Allah has revealed regarding you a verse of the Quran. Allah has instructed Muhammad to return this trust to whom it belongs to. For that reason this key has been given back to you here.”

“I bear witness that indeed Allah is one and Muhammad (peace be upon him) is none other than the messenger of Allah.”

The Key Remains with Talhah’s Family

Do you know what happened? Angel Gabriel came down with more revelation. This time not in the form of Quran but in the form of an instruction to Muhammad (peace be upon him):

“O Muhammad, get up and inform Uthman ibn Talhah that the key of the Kabah will remain with his progeny and family until the day of resurrection.”

To this minute, the key is with the members of the family of Uthman ibn Talhah.

Uthman ibn Talhah became known as one of the greatest companions.

This was the power of the revelation of the Quran. This is what happened to Uthman ibn Talhah. And this was the justice of Islam, can we compete with this?

Imagine Al Abbas, the uncle of the Prophet, was asking for the key and Allah says: “No. Return the key to Uthman ibn Talhah.”