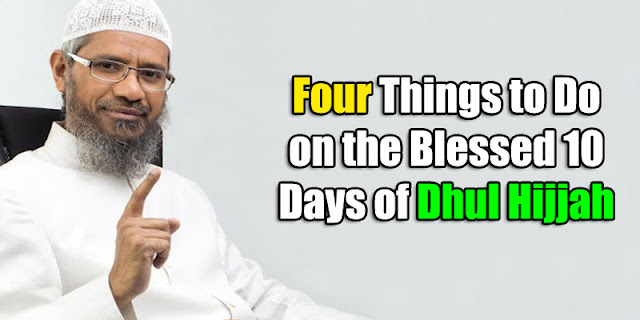 This oath substantiates the greatness and sacredness of these ten nights in the eyes of Allah. This is an extraordinary oath; it is very reliable and significant and the wise men can understand that by this oath, Allah too attaches great importance and value to the ten nights of Dhul Hijjah.

The Prophet ṣallallāhu 'alayhi wa sallam (peace and blessings of Allāh be upon him) has said regarding these blessed days:

It is clear then that these 10 days possess tremendous blessings and excellence. Therefore we should spend these 10 blessed days and nights in intensive worship and virtuous acts. Therefore we cannot possibly afford to miss out on such immense rewards otherwise we will definitely be in utter regret in the Hereafter!

The following are recommended acts to do during the blessed 10 days and nights of Dhul Hijjah.

1. Fasting the 9 days of Dhul Hijjah

It is recommended to fast on the first nine days of Dhul Hijjah, especially on the 9th which is the blessed day of Arafah. Allah’s Messenger ṣallallāhu 'alayhi wa sallam (peace and blessings of Allāh be upon him) encouraged us to do righteous deeds in the first ten days of Dhul Hijjah; and indeed fasting is one of the best of deeds.

Almighty Allah says, “All the deeds of the son of Adam are for him, except fasting, which is for Me and I shall reward for it.”’ [Sahih Al-Bukhari]

NOTE: The 10th of Dhul Hijjah is the day of Eid ul Adha and it is prohibited to fast on this day.

FORGIVENESS FOR 2 YEARS OF SINS (MINOR SINS) FOR FASTING ON THE DAY OF ARAFAH:

Therefore we should try our utmost to fast all the blessed 9 days of Dhul Hijjah – particularly the 9th of Dhul Hijjah which is the day of Arafah. If not then we should at least fast as many as we can possibly can as we may not get this opportunity again next year as life is uncertain and we should never procrastinate on doing good actions.

TIP: Eat light and hydrate well. If you will be staying up until Fajr, then the more you eat, the harder it will be for you to stay up and the less productive you will be! Keep some water with you at all times during the night. This will help you stay up, feel energised and refreshed and have a clearer mind. Also encourage your family and friends to join in!

It is Sunnah to recite takbeer (Allahu Akbar), tahmeed (Alhamdulillah), tahleel (Laa ilaaha ill-Allah), and tasbeeh (SubhanAllah) during the first ten days of Dhul Hijjah. These words should be recited abundantly in the masajid, homes, streets and in every place where it is permissible to remember and glorify Allah.

“That they may witness things that are of benefit to them (reward of Hajj in the Hereafter and also some worldly gain from trade), and mention the Name of Allah on appointed days, over the beast of cattle that He has provided for them (for sacrifice).” [Surah Al-Haj:28]

RECITING THE TAKBEERAAT-E-TASHREEQ FROM THE 9TH TO THE 13TH OF DHUL HIJJAH:

TIP: Remember and glorify Allah no matter what you are doing: This is particularly easy as one can remember Allah anywhere and at any time whether it is during work or any daily activity.

3. Offering the Qurbani (sacrifice of a livestock animal)

The qurbani (also known as udh’hiya) is the sacrifice of a livestock animal during Eid ul-Adha. It is the sunnah of Prophet Ibrahim 'alayhi'l-salām (peace be upon him). It is a means of getting closer to Allah subḥānahu wa ta'āla (glorified and exalted be He). It is obligatory upon every sane adult who is not a traveller and can afford it (wealth equal to or more than nisab). It is performed on the days of sacrifice which is the 10th, 11th or 12th of Dhul Hijjah. One may sacrifice a thousand animals on days other than these, but it will never be regarded or considered as udh’hiya. Therefore the qurbani is a sacred act which can only be done during the three days of Dhul Hijjah as specified. Regarding the qurbani, Allah says in the Qur’an:

TIP: It is best to go about the sacrifice the traditional way and offering it in your locality so that you obtain the lesson from the sacrifice and remind yourself of the emotions and test that Prophet Ibrahim 'alayhi'l-salām (peace be upon him) himself endured. However, where you face logistical issues, nowadays it is much easier for us to fulfil this sacred act by the mere click of a button over the Internet where we can buy an animal to be sacrificed on the various established Muslim charity websites.

The Prophet ṣallallāhu 'alayhi wa sallam (peace and blessings of Allāh be upon him) said: “There are no days in which righteous deeds are more beloved to Allah than these ten days (Dhul Hijjah).” [Sunan Ibn Majah]

Therefore we should increase the amount of good deeds we do in order to take advantage of this blessed time where good deeds are increased significantly.

TIP: Complete as many worldly tasks as possible beforehand and do not waste this precious time: Make arrangements to clear as many of your pending tasks as possible or make a plan for tackling them later. This way, one is free to worship during the 10 days and nights without being distracted by worldly tasks. We must make a firm intention that during these blessed 10 days that we will not take part in idle talk, watch TV, play computer games or spend time on the social media. There are many more days in the year for all that – if you really cannot resist. This is just 10 days! Consider the utter loss and regret for those who waste these blessed 10 days.