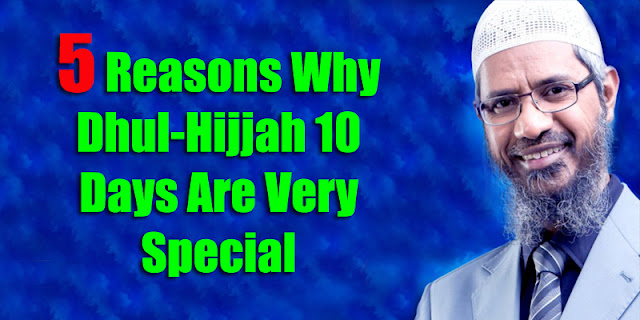 These days, many messages and posts on social media are circulated about the significance of Dhul-Hiijah 10 days. Scholars and Imams encourage people to increase their good deeds.

You may wonder why these days are receiving so much attention. After all, these are not Ramadan days.

But, you know what? These days are comparable to, or even better than Ramadan. This might be unknown to many.

Scholars used to compare the 10 days of Dhul-Hijjah with the last 10 days of Ramadan; they tried to establish which of the two periods is better based on the Quran and Hadith texts. This in itself shows the greatness of these days.

HERE ARE 5 REASONS WHY DHUL-HIJJAH 10 DAYS ARE SO SPECIAL:

Several hadiths mentioned that these days are THE best:

Jabir reported that the Prophet (peace and blessings be upon him) said:

In another hadith, the Prophet is also reported to have said:

Ibn Abbas narrated that the Prophet (peace and blessings be upon him) said:

“There are no days in which righteous deeds are more beloved to Allah than those ten days.“

They said: “O Messenger of Allah! Not even Jihad in Allah Cause?”

“Not even Jihad in Allah’s Cause, unless a man were to out with his self and his wealth and not return from that with anything.” (At-Tirmidhi)

3) Allah Swore by Them in the Quran

Many scholars, including the Prophet’s Companions Ibn Abbas and Ibn Az-Zubair interpreted verse number 2 of Surat Al-Fajr, which reads: {And [by] ten nights} as referring to the first 10 days of Dhul-Hijjah.

4) They Include the Best Day

Abdullah ibn Qurt reported that the Prophet described Dhul-Hijjah 10, the day of sacrifice, as the best day in Allah’s sight. (Abu Dawud and authenticated by Al-Albani)

The Day of `Arafah is a very Special day. It includes one of the most important rituals of Hajj which is standing in Arafah. During this day, Allah blesses His servants with immense forgiveness and mercy

Muslim reported from `A’ishah that the Prophet (peace and blessings be upon him) said,

“There is no day on which Allah sets free more slaves from Hell than He does on the Day of `Arafah.”

Even non-pilgrims have their share of blessings on this day; fasting on the day of `Arafah removes their sins for two whole years, the previous year and the coming one.

So, here is another chance to get closer to Allah and to recharge our spirituality. Let’s not miss this great opportunity. No one is guaranteed to live until the next Ramadan or Dhul-Hijjah.