What is Mina? The Tent City. 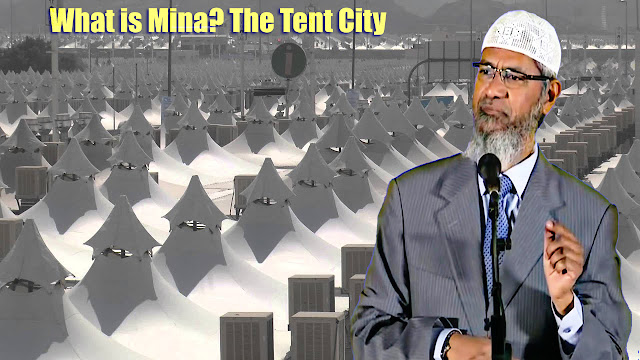 Mina – a valley situated 5km east to the Holy city Makkah. Also know as “Tent City”, as there are more than 100,000 air conditioned tents permanently situated by the government for the pilgrims; as this is the main place to stay – 8th Dhul Hijjah then 10th-13th Dhul Hijjah.

Pilgrims travel towards Mina on 8th Dhul Hijjah from Makkah. There is no specific time to reach there but according to Sunnah one should reach before Dhuhr prayer and from then onwards all the prayers are offered as qasr (shortened).

For this travel from Makkah to Mina a special route has been made by Saudi Government named as “Tareeq ul Mushaat” for the ones who wish to travel on foot.

On the way either walking or on any vehicle it is a Sunnah to recite Takbir (Allahu Akbar), Tahlil (La Illaha illa Allah) and Talbiah. Talbiah is recited during whole journey of Hajj.

Pilgrims return to Mina from Arafat on 10th Dhul Hijjah morning and stoning of Jamarah and sacrifice of animals is performed – either in Makkah or Mina. The pebbles for stoning are normally collected from Muzdalifah but according to sunnah the pebbles for Prophet (PBUH) were collected from Mina.

After pelting of jamarah, sacrifice and tawaf, ihram is done and one can make ghusl and change to normal clothes after cutting hair.

Why Remain in Mina?

This all is done on the 10th of Dhul Hijjah. At that point, why is it critical to remain in Mina until the 13th Dhul Hijjah and not come back to Makkah?

Hajj is not only observing and performing rituals but it’s a name of learning deep and more about Islam, Allah, and one’s own self.

Thousands of Muslims from all over the world gather in Mina; when you are free from all the restrictions of ihram, you can mingle among people, know them, review your own deeds, review what you learned during the hajj rituals and focus on what has to be done for your betterment in future.

Without any restriction of time or performing rituals you can make duas, ask for mercy and help from Allah.

Hajj is to come to Mina, all at same time, to learn faith, patience, forgiveness, victory of completing rituals with all the others. This is the stay or time to learn self devotion, which has been taught by Prophets especially by Ibrahim.

This is a place where there is nothing of interest exists but here you live for three more days after sacrifice and restrictions.

Until now you were doing everything for your benefit but now it is time to serve others, that is why you are told to come here at the time of hajj when everyone is here, coming alone is not considered hajj.

Allah has arranged a meeting as a reward for the people who has just defeated Satan and sacrificed in Allah’s way for everyone to renew their promise and review what they have sacrificed and now how they have to fulfill the promise made with their creator.

Mina is the land of love, struggle, and martyrdom. It is the land where people make their promises to God.