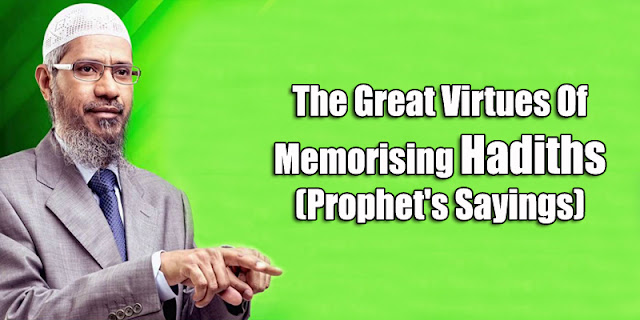 Memorizing saheeh Prophetic hadiths and studying them comes under the heading of virtuous and good deeds, and is among the best of acts of worship. This is clear from the following:

Memorizing them involves paying attention to understanding them, comprehending their meanings and conveying them to people.

At-Tirmidhi (2658) narrated from ‘Abdullah ibn Mas‘ood that the Prophet (blessings and peace of Allah be upon him) said: “May Allah beautify a man who hears a saying of mine, so he understands it, remembers it and conveys it. There may be one who conveys knowledge to someone who understands it better than he does.”

Al-Bazzaar (3416) narrated from Muhammad ibn Jubayr ibn Mut‘im, from his father (may Allah be pleased with him), from the Prophet (blessings and peace of Allah be upon him) that he said: “May Allah beautify a man who hears a saying of mine, so he memorises it and conveys it as he heard it.”

This hadith contains a supplication or a statement [because the Arabic wording may be interpreted in either sense] from the Prophet (blessings and peace of Allah be upon him) that whoever memorises a hadith and conveys it as he memorises it will attain that beautification.

With regard to beautification, what is meant here is wellbeing and radiance.

What is meant is that Allah will single him out for joy and happiness in this world, and He will grant him bliss in the hereafter, so that the radiance of a life of ease will be seen on him.

It was narrated from Abu Moosa al-Ash‘ari that the Prophet (blessings and peace of Allah be upon him) said: “The likeness of the guidance and knowledge with which Allah has sent me is that of rain falling upon the earth. Some of it is good ground which receives the water and brings forth a great deal of herbage and grass. Some of it is hard but it retains the water, and Allah benefits people by it, and they drink it and give it to their animals to drink and use it for irrigation. And another part of it is barren, it does not retain the water or produce herbage. That is the likeness of one who gains an understanding of the religion of Allah, and Allah benefits him by that with which Allah has sent me, and he learns and teaches others; and the likeness of a man who pays no attention to that, and does not accept the guidance of Allah with which I have been sent.”

So the Messenger (blessings and peace of Allah be upon him) divided people into three categories: two praiseworthy categories, namely the scholar who has understanding and teaches the people, and the one who memorises knowledge that he conveys to others; and a blameworthy category, namely the one in whom there is no benefit.

Al-Haafiz Ibn Hajar (may Allah have mercy on him) said:

He likened those who listened to him to different types of earth on which rain falls. Among them is the knowledgeable person who acts upon what he learns and teaches others. He is like the good earth that absorbs the water, benefits from it itself, and produces vegetation, thus benefiting others.

And among them is the one who collects knowledge and spends his time on that, but he does not do supererogatory deeds or understand what he has collected in depth, but he conveys it to others. He is like the earth on which water settles and people benefit from it. Such is the type of person referred to in the words “May Allah beautify a man who hears a saying of mine, so he memorises it and conveys it as he heard it.”

And among them is the one who hears knowledge but does not memorise it, act upon it or convey it to others. He is like the barren earth that does not absorb water, or spoils it for others. Both of the first two, praiseworthy groups are of benefit to others, and the third, blameworthy group stands alone because there is no benefit for others in it. And Allah knows best.


That comes under the heading of knowledge which, whoever pursues it, Allah will make easy for him thereby a path to Paradise. And the reports that speak of the virtue of seeking knowledge and spreading it among people are well known.

Memorizing hadith is one of the characteristics of the scholars, who are the heirs of the Prophets.

Memorising them is a preservation of the religion and protecting one of its most important foundations. Were it not that Allah caused the scholars to memorise and preserve the hadiths, the Sunnah would have been lost. Hence the Prophet (blessings and peace of Allah be upon him) said: “Allah will not take away knowledge by snatching it away from the people, rather He will take away knowledge by taking away the scholars until, when there is no scholar left, people will turn to ignorant leaders who will be asked questions and will issue fatwas without knowledge. They will go astray and lead others astray.”

Ad-Daarimi (143) narrated that Ibn ‘Mas‘ood (may Allah be pleased with him) said: You must seek knowledge before it is taken away, and what is meant by being taken away is that those who possess it will be taken away.

Another aspect of the blessing of memorising hadiths is striving to spread them and teach them to people, because spreading the hadiths is spreading knowledge and propagating the Sunnah.

Shaykh Ibn Baaz (may Allah have mercy on him) said: