Allah Talks About the Great News in Quran 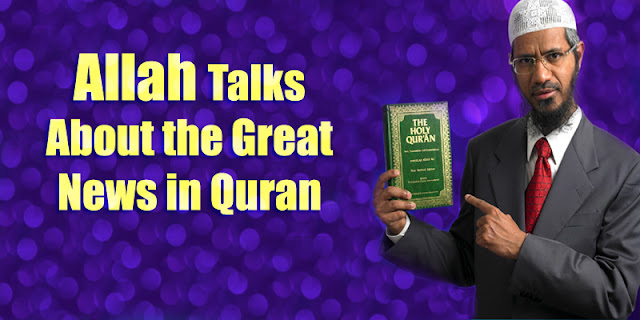 The main division of the Quran is into chapters and verses, however it is also divided into 30 roughly equal parts. Each part is known in Arabic as a juz.

Because each juz is not usually divided along chapter lines, each one is sometimes referred to by its first word. The thirtieth part is known as juz amma, and it is named after the first word of its first chapter; chapter 78, The Great News.

This is the first of the short chapters found towards the end of the Quran. It is generally accepted that most of these chapters were revealed in Makkah during the first years of the mission of Prophet Muhammad (peace be upon him).

During this period, the people of Makkah who had not already embraced Islam, mocked and expressed doubt in the doctrine of the Hereafter.

The title of the chapter is taken from the second verse, and its name denotes its subject matter. The word naba implies the news of the Resurrection and the Hereafter and the entire 40 verses are devoted to this theme.

The Great News opens by listing Allah’s gifts to humankind; it then gives a stern warning about a day of resurrection and an accounting for one’s deeds and behavior.
Verses 1 – 4 A Question Of Belief

Allah asks a question. What do they ask one another? What is it that they are talking about? It is a rhetorical question asked in order to produce an effect in us. He provides us with the answer; they are talking about the great news. (It is the certainty of the Resurrection and the Hereafter.) Are they really talking and arguing about this event when they should be preparing for it?

It will not be long before they understand; very soon they will come to know that the Day of Resurrection and the Hereafter are real. This is an emphasized and a confirmed warning for those who persist in denying the inevitability of this day.

Allah gives evidence of His power. He made the earth smooth and the mountains secure. They are pegged into the earth for stability and balance. He created people in pairs, male and female, and created sleep in order that people may rest.

Allah made the night as a mantle, a cover or concealment, and the day so that humankind may earn their livelihood.

In a perfectly designed universe, the earth is in its own orbit spinning around a life-sustaining sun. And He has sent down rain in abundance in order to facilitate the growth of vegetation of all kinds, from grain to luxurious gardens.

Allah clarifies that the date for the Day of Resurrection has already been set. On that momentous day the trumpet will be blown, and all of humankind will rise out of their graves. They will come in crowds as the sky opens up wide as if it were doors or gateways. The mountains will shake until they become a mirage.

These things will happen. Hell is lying in wait for those who disbelieve or transgress the commandments of Allah. It is there that they will live for an unending time. They will feel no cool breeze nor have cool water to drink. Those who dwell in Hell will be offered nothing but scalding water and decaying filth. It will be an appropriate recompense, in proportion to their crimes.

The disbelievers did not expect to be called to account. They blithely denied the revelations. They did not fear a reckoning and described the messages as lies. However, everything was documented in a clear record. Now they will taste and experience the fruits of their labor. The inmates of Hell can expect nothing but an increase in the torment they feel.
Verses 31 – 37 Gifts For The Righteous

The righteous, those who were aware of Allah and their commitment to Him, will find success, reward and safety from the fires of Hell. They will achieve their heart’s desires, beautiful gardens and vineyards. They will have perfect companions, and they will both drink from overflowing cups. In this beautiful garden, they will hear no vain talk nor will they be told any lies.

This is a gift from the boundless generosity of the Merciful Allah to the righteous. They will not only be given what is due to them but even more, because He is the Lord of the heavens and the earth and all that lies between them. The Day will be so awe-inspiring that no one will be capable of speaking to Allah without His permission.

The Day of Resurrection is the day on which Angel Gabriel and the angels with will stand together in ranks, row after row. Nobody will speak except those to whom the compassionate Allah grants permission. Even then they will only be capable of speaking the truth because this is the Day of Truth.

This day will become a reality so whoever desires to be successful should seek a way to Allah through correct beliefs and righteous deeds.

The people have been warned of an imminent punishment. On the Day of Resurrection, everybody will see the truth of their actions and deeds. They will see what their hands have sent forth, and many will wish that they had remained in the earth as nothing but dust. The cry of the unbeliever will be, “If only I were dust.”