12 Places to Visit in Madinah 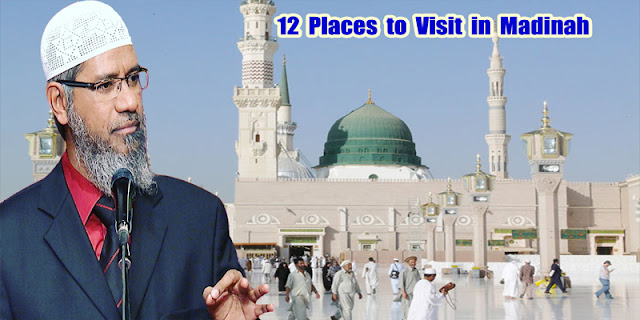 When you are in the city of our Holy Prophet (PBUH), Ziyarah should be one of the top things on your to-do list. Ziyarah is basically the visit to landmarks associated with prominent Islamic figures.

After the visit to Masjid-Nabawi, you can visit several places in and around the city which hold great historical significance in Islam. Here’s a list of places that you must visit when in Madinah.

This is the first mosque in Islam. It is situated around 3 km away from Masjid-Nabawi. According to a Hadith, 2 units of nafl prayer here are equivalent to an Umrah.

Whoever purifies himself in his house then comes to the mosque of Quba’ and prays there, he will have a reward like that for ‘Umrah. (Ibn Majah, 6154)

This mosque is near Masjid-Nabawi. When the Prophet (PBUH) was migrating from Makkah to Madinah, he offered the Friday prayer at this location, hence the name.

The Munafiqin met in this Masjid to conspire against the Muslims, hence, on the orders of the Prophet (PBUH), the Masjid was burned. The ruins are still present. This incident is also mentioned in the Quran:

And there are those who put up a mosque by way of mischief and infidelity…. (Quran 9:107)

This is very near to Masjid Ghamama. Abu Bakr (RA) used to reside here. Later on, it was built into a mosque.

Similar to Masjid Abu Bakr (RA), Masjid Ali was also built on the residence of a Caliph.

Masjid Bilal is named after Bilal (RA) who was the first Muslim to call the Athan.

This is the location of the second battle of Islam, Battle of Uhud. A cemetery consisting of graves of the martyrs of the battle (including Hamza’s (RA), Prophet’s uncle) is also situated here.

It was at this mosque that the Prophet (PBUH) was praying when he received the revelation to change the direction they were facing, while praying, from Masjid Al Aqsa to Masjid Al Haram.

10. Site of the Battle of Trench

Several important mosques are located here; including Masjid Fatah (also known as Masjid Ahzab). You can also see the place where the Muslims put up their camps for the impending battle.

This is a famous slope located around 30-40 km from Madinah. If you were to pour water on the slope, it will flow against it!

Bir Shifa is a well in Madinah which had poisonous water; however after the Prophet (PBUH) spit into it, it turned into the well of Shifa. Bir Uthman on the other hand was bought for the Muslims by Uthman bin Affan (RA) when Madinah suffered from a drought with shortage of water and the Muslims had to buy water at exorbitant prices from a Jew.

Visiting these places is very fascinating as it revives the stories that we’ve heard of numerous times while growing up, bringing them to life.