7 Sunnahs to Do on the Night and Day of Eid 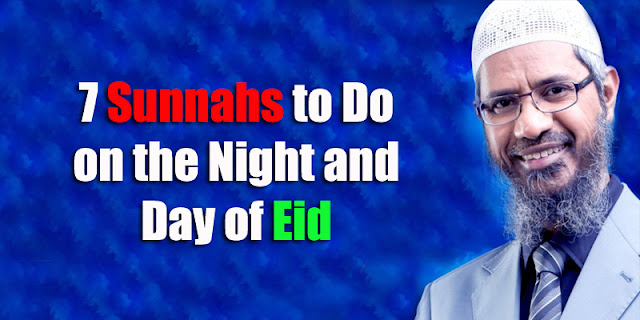 We’re going to talk about a few Sunnahs to do in Eid. There’s going to be one sunnah that starts from the night before ‘Eid and then a few more that happen on the morning of ‘Eid.

In Islam, the new day basically starts at Maghrib. So as soon as we know that the next day is going to be Eid, we start saying the Takbir of ‘eid-ul-fitr. This is different than the takbir of ‘Eid-ul-Adha so don’t get confused. I’m only going to give you information Eid-ul-Fitr in this article.

When you wake up for Fajr, the other Sunnahs that you could be practicing are:

1- Eat an odd number of dates

3- Get dressed up for ‘Eid prayers and also for men can perfume themselves. For women, you should dress neatly and nicely but modestly.

4- The main sunnah for ‘Eid is to go to ‘Eid prayers. Prophet Muhammad encouraged everyone to go, men, women, children, even the women who are menstruating are encouraged to go and listen to the prayers and khutbah.

You might be wondering how ‘Eid prayers are offered. First of all, there is no adhan, no iqamah and when the imam is reciting, you just listen and then follow through with the movements.

The actual prayer is a two rak’ahs prayer done in congregation but it’s different from the Fajr prayer. In the first rak’ah there are seven takbir and in the second rak’ah there are five takbir, not including the takbir that you say before each movement.

In the first rak’ah you do the opening with takbir with your hands up and then you put your hands on your chest.

After that recite the opening du’a and then the imam starts with the takbir and you say the takbir after him.

Then the imam will start the prayer with the opening (Al-Fatihah) and other chapter.
When you stand up for the second rak’ah, the imam will again recite the takbir and you respond five times. Then you will go through chapter Al-Fatihah and a chapter, just like in the normal prayer, until you finish with salams.

5- When the ‘Eid prayers are finished, basically worshipers should sit down and listen to the khutbah. As a reminder for us, no talking during the Khutbah! Just listen to the message of the imam and take in those blessings.

6- When the khutbah has been delivered, there will probably a flood of people who want to greet you. The sunnah greeting that you should be saying on eid: “Taqabbala Allah minna wa minkum” (May Allah accept from us the good deeds and also from you). The easiest response to this is to say “Ameen”.

If you have not paid your zakat-ul-Fitr, remember to do that before ‘Eid prayers.