5 Ways to Protect Yourself Against Shaytaan. 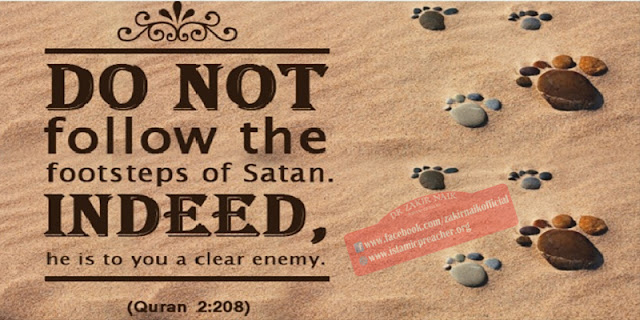 As Muslims, we have a strong belief in Allah Almighty as the Supreme Power. We also know that He has created Satan from fire, who was among the ranks of obedient Angels but got accursed from the Exalted Lord as a result of its disobedience by not prostrating in front of Adam and Hawwa (Eve). The fallen angel has been granted enough control by the Glorified God to test the truthfulness of our faith and conviction in Islamic teachings.

“O you, who have believed, enter into Islam completely [and perfectly] and do not follow the footsteps of Satan. Indeed, he is to you a clear enemy. But if you deviate after clear proofs have come to you, and then know that Allah is the Exalted in Might and Wise.” [Quran, 2: 208-209]

Allah SWT has clearly warned us to stay safe from the satanic evil by sticking to our Islamic devotion and beliefs. After being aware that Shaitaan is always ready to stray us from the right path, we have to safeguard our Eeman. Just like we protect our houses and properties from a potential robbery, when we come across news of thieves operating in the city. In the same way, we also have to take some defensive measures against this devil, as we do not have the capacity to fight it, but we can only guard ourselves from it.

Let us discuss some of the possible ways to shield ourselves from its wickedness successfully:

In the context of the above discussion, since a Muslim knows that only God can give it the power to resist sharr (sin) of the Lucifer from affecting its heart and soul. So, one must make a strict routine to think about the Greatness of the Dignified One, which will make it to rely only on One Allah SWT. We also carry out the act of asking for being on the straight path while reciting Surah Fatiha five times a day during our prayers. The Almighty has repeatedly reminded us in the Sacred Book of the fact that Satan is our chief foe, whose main objective is to spread abhorrence and make us unable to distinguish between the right and the wrong.

“Satan only wants to cause between you animosity and hatred through intoxicants and gambling and to avert you from the remembrance of Allah and from prayer. So will you not desist?” [Quran, 5: 91]

So, if Shaitaan does not want us to offer Salah, and take God`s name and ask for His guidance, it means that one can surely preserve itself from the harm of the demon by calling the name of the Exalted One. So, to be on the safer side, we need to pray to our Gracious Lord all the time for seeking His enlightenment to make us able to save ourselves from the evil spirits.

We Muslims are familiar with the term “Ta`awuudh or Isti`adhah”, which has to be rehearsed before starting every action in general, and reciting the Holy Quran especially. It is actually practicing “a uthu billahi minash Shaitaanir Rajeem”, which means “to take Allah`s protection from the accursed Satan”. We are advised frequently to request the Almighty for His refuge from the Angel of Darkness in the Holy Book.

“And if an evil suggestion comes to you from Satan, then seek refuge in Allah . Indeed, He is Hearing and Knowing..” [Quran 7: 200]

When we are in any trouble, we always ask for Allah`s help, but why do we forget to remember Him, when we are not safe from the malevolence of the King of Hell and could fall into its trap any time? Knowing that we could be in danger of acting on the satanic thoughts anytime, we should ask only for Allah`s help, as He knows the best of the best.

The Sanctified Scripture of Quran-i-Majeed is the definitive source of gaining wisdom about the various aspects of life, like speaking the truth, avoiding gambling, and fulfilling others` rights etc. On one hand, learning and reading the Quran freshens up the Muslim soul, which is also a good means of protection from the Wicked One, but the greater implication of this Blessed Manuscript is to actually knowing its lessons. One comes to know about the Day of Judgment, which leads to avoid committing many sins on earth. As Allah Almighty says:

“And Iblees had already confirmed through them his assumption, so they followed him, except for a party of believers. And he had over them no authority except [it was decreed] that We might make evident who believes in the Hereafter from who is thereof in doubt. And your Lord, over all things, is Guardian.” [Quran, 34: 20-21]

The above-stated Ayahs show that those who firmly believe on the Final Day will never come under the influence of the Author of evil. Apart from getting to know about many things to avoid, the recitation of the Holy Quran also serves as a source of praying to Allah Almighty, as It contains a lot of such verses, which are solely based on the appeals to the Most Merciful. Our Holy Prophet, Muhammad (PBUH) has also directed us to read the Divine Volume, and also emphasized on narrating certain Surahs to stay safe from the immorality of the Lucifer.

“The house in which al-Baqarah is recited is not approached by Shaytan.” [Muslim]

So, Quran not only increases our knowledge through understanding it but also contains some chapters which are basis for praising Allah SWT, the Exalted, increase in one`s faith, and praying for His mercy, and its recital process makes Satan run away from that place.

STAYING IN STATE OF ABLUTION

It is the Sunnah of the Messenger (PBUH) of Allah to remain in condition of complete cleanliness and wudu (ablution). This act has been emphasized to carry out, since it prevents from acting immorally. When we perform this take action, whether for the regular prayers or Quran recitation, we try to remain positive and calm, as we know that if we speak or do anything ill, we will not remain clean spiritually. So, staying away from evil feelings and be morally active means we have shun any possible satanic attempt of misleading us.

NOT BELIEVING IN SUPERSTITIONS

Nowadays, it has become a common practice among us all that we have started to consider fallacies like lucky charms, avoiding coming across black cats, Friday the 13th is a bad day etc. which we have adapted from the West. How can lucky charms save us every time we go into exams, or the creations of God like innocent black cats are harmful to our destiny, or even a particular day of the month can be a source of curse? These thoughts have been put into man`s mind by Satan to make it forget the rightful things. Same is the case in Muslim society particularly, with the rising use of Taweez (amulet) with believing that the one who gives talisman is the helper, which is Shirk (comparing someone else to Allah). There is no harm in wearing them as long as they are written with Quranic verses, and believing that only the Almighty removes our illnesses by having these lines of the Sacred Book written on Taaweez, as the Holy Prophet (PBUH) said:

There is no harm in incantations as long as they do not include Shirk.” (Muslim)

So, we Muslims should try our best to act upon the above-described methods of keeping away from Satan`s reach to fulfill our religious and moral responsibilities effectively.

May Allah Almighty always save us from the sinfulness of the devil! Aameen!