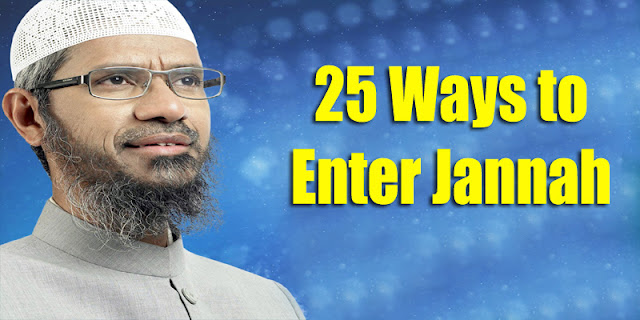 1. "Whoever meets Allah without ascribing anything to Him will enter Jannah."[Bukhar­i]

2. "Whoever believes (has Imaan) in Allah and His Messenger (sal Allahu alayhi wa sallam), and establishes the prayer and fasts the month of Ramadan, it is incumbent upon Allah that He enters him in Jannah." [Bukhari]

3. "Whoever builds a masjid seeking by it the Pleasure of Allah, Allah will build for him a similar place in Jannah." [Bukhari]

4. "Whoever prays the two cool prayers (Asr and Fajr) will enter Jannah." [Bukhari]

5. "Whoever goes to the masjid (every) morning and in the afternoon (for the congregational prayer), Allah will prepare for him an honorable place in Jannah with good hospitality for (what he has done) every morning and afternoon goings." [Bukhari]

7. "Whoever prays 12 rakaat in the day and night, a house in Jannah will be built for him." [Muslim]

8. "Whoever treads a path in search of knowledge, Allah will make easy for him the path to Jannah." [Bukhari]

9. "Whoever repeats after the muadhdhin from his heart (i.e., sincerely) will enter Jannah. [Abu Dawud]
10. "There is not one of you who perfects his wudu and prays two rakaat setting about them with his heart as well as his face except that JANNAH would be mandatory for him." [Abu Dawud]

11. Whoever says: “I am pleased with Allah as my Rabb, and with Islam as my Deen, and with Muhammad (sal Allahu alayhi wa sallam) as my Prophet, Jannah would be mandatory for him." [Abu Dawud]

13. Whoever says “SubhanAllah al-Adheem WA biHamdihi, Glorified and Exalted is Allah, The Great, and with His Praise”, a date-palm will planted for him in Jannah." [Tirmidhi]

14." Whoever dies and is free from three: arrogance, grudges, and debt will enter Jannah." [Tirmidhi]

15. "Whoever raises two girls, he and I will enter Jannah." [Tirmidhi]

16." Whoever calls the adhan for 12 years, JANNAH will become mandatory for him." [ibn Maajah]

18. "Whoever visits an ailing person or a brother of his to seek the Pleasure of Allah, an announcer (angel) calls out: May you be happy, may your walking be blessed, and may you be awarded a dignified position in Jannah." [Tirmidhi]

20. "Allah guarantees him who strives in His Cause and whose motivation for going out is nothing but Jihad in His Cause and belief in His Word, that He will admit him into Jannah." [Bukhari]
21. "O people spread the salaam (greetings), feed the hungry, and pray while the people are asleep, you will enter Jannah in peace." [Tirmidhi]

22. "(The performance of) Umrah is an expiation for the sins committed between it and the previous Umrah; and the reward of Hajj Mabrur (i.e., one accepted) is nothing but Jannah." [Bukhari]

23. "Allah has ninety-nine Names, one hundred minus one, and whoever believes in their meanings and acts accordingly, will enter Jannah." [Bukhari]

24. "I saw a man going about in Jannah (and enjoying himself) as a reward for cutting from the middle of the road, a tree which was causing inconvenience to the Muslims." [Muslim]

"O Allah, You are my Lord, none has the right to be worshipped except You, You created me and I am Your servant and I abide to Your covenant and promise as best I can, I take refuge in You from the evil of which I committed. I acknowledge Your favor upon me and I acknowledge my sin, so forgive me, for verily none can forgive sin except You."

Allah Almighty say in glorious Quran in Chapter no:9 Verse no:72 that, “Allah has promised the believing men and women estates with rivers flowing beneath it, in which they will abide, and pleasing homes in the gardens of Eden. And the acceptance from Allah is the most important; such is the greatest success.”