What Is the Significance of Itikaf? 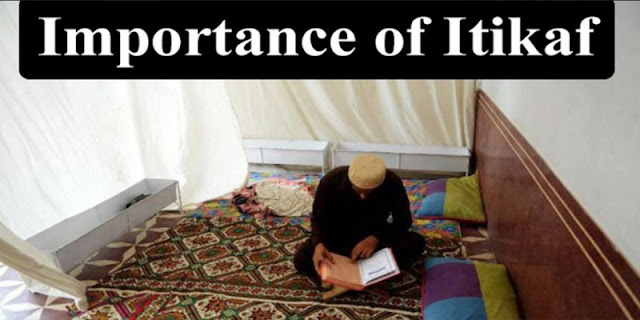 1- The idea behind itikaf is to exhort Muslims to devote themselves exclusively to prayer and devotion at least for a few days during the year in order to develop deep Allah-consciousness, because it is this consciousness which is the fountainhead of a Muslim’s thought and deed.

2- Itikaf is, in fact, the next stage of fasting in spiritual development and purification of the soul. During the days of itikaf, the mutakif (one who enters in itikaf) dissociates himself from all worldly affairs and spends his time in prayer and supplication.

He (Allah) also prescribed itikaf for them (Muslims), by which it is intended that the heart is fully occupied with Allah, the Most High, concentrated upon Him alone, and cut off from preoccupation with the creatures.

Rather it is so engrossed with Him alone, the One free of all defects, that remembering Him, loving Him and turning to Him takes the place of all anxieties of the heart and its suggestions, so that he is able to overcome them.

Thus all his concerns are for Him. His thoughts are all of the remembrance of Him, and thinking of how to attain His pleasure and what will cause nearness to Him. This leads him to feel contented with Allah instead of the people, so that prepares him for being at peace with Him alone on the day of loneliness in the grave, when there is no one else to give comfort, nor anyone to grant solace except Him. So this is the greater goal of itikaf.

Itikaf is a Sunnah and according to many jurists it is a confirmed Sunnah upon able Muslims. This is because the Prophet (peace and blessings be upon him) used to do it all his life and the Mothers of Believers and Companions continued to do it after his death.

Even before the Prophet (peace and blessings be upon him) received the revelation, he used to retreat in the cave of Hira’ in Makkah every Ramadan for a number of days and nights, contemplating and thinking about Allah and His creation.

As a Muslim, you know that in this cave the Prophet saw Jibreel (Gabriel), talked to him, and heard the first verses of the Quran from him. Why should we do i`tikaf then, one may ask. The simple and direct answer to this question is that we do it to follow in the steps of the Prophet (peace and blessings be upon him). But to explain this to you and any interested Muslim or non-Muslim we say that i`tikaf is mentioned in the Qur’an in the context of the mosque and as fasting was prescribed to the preceding nations.

Itikaf also was practiced by these nations. Allah says in the Quran: {Lo! those who disbelieve and bar (men) from the way of Allah and from the Inviolable Place of Worship, which We have appointed for mankind together, the dweller therein and the nomad; whosoever seeketh wrongful partiality therein, him We shall cause to taste a painful doom. And (remember) when We prepared for Abraham the place of the (holy) House, saying: Ascribe thou no thing as partner unto Me, and purify My House for those who make the round (thereof) and those who stand and those who bow and make prostration.} (Al-Hajj 22: 25-26)

In many religions, it is doctrinally and spiritually required that monks and hermits should isolate themselves from people and live in cells and monasteries all their life. Allah says: {Then We caused Our messengers to follow in their footsteps; and We caused Jesus, son of Mary, to follow, and gave him the Gospel, and placed compassion and mercy in the hearts of those who followed him. But monasticism they invented. We ordained it not for them. Only seeking Allah’s pleasure, and they observed it not with right observance. So We give those of them who believe their reward, but many of them are evil livers.} (Al-Hadid 57: 27)

But in Islam, it is just ten days that should be spent in itikaf for those who are able to do so.

Itikaf may seem to be a negative act, but if you think about it deeply and if it is done perfectly it is a positive and healthy act. Staying in the mosque for ten days spending time in worship, reading the Quran, thinking positively of Allah and His creation charges our spirits and empowers our bodies and thinking. It also teaches us how to be self-disciplined and have full control over ourselves.

It teaches us how to measure the real value of life and to make sure that we are on the right track, to shake off the dust of sins from our souls, to enrich and deepen our spiritual sense, to sharpen our vision, to look forward towards the Hereafter before it is eminent for us. Itikaf does not mean to be negative towards performing your duties in life or to run away from people and live by yourself. This is not in any sense the aims of itikaf.

Not all Muslims should do itikaf, but those who are able to do it. Also, it should be inside the mosque so that you are still with Muslims not away from them. You have a spiritual and hygienic environment around yourself, you are not isolated or neglected.

If itikaf can affect your living standard or affect the work in general or harm the society in any way, it is not obligatory to do it in this case.

In our daily routine, we should have a vacation or holiday. Some spend their holidays by traveling abroad, or at the seashore, or in nightclubs and places of amusement, and in this way they may spend lots of money just to feel happy..

Itikaf can provide you with great happiness, refreshment, tranquility, stability in mind and soul at hardly any cost.