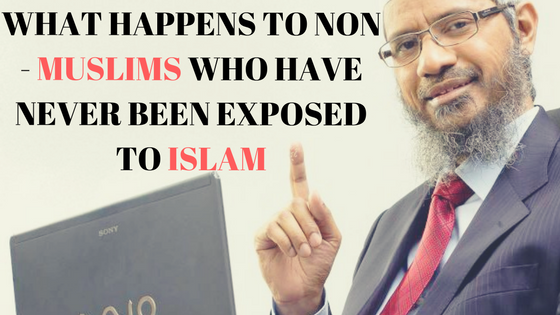 If a non-Muslim comes and tells me that they have not been exposed to Islam. Today in this world of science and technology it's difficult. Maybe if you ask this question fifty years back it was possible.

Now, what happens to the non-Muslims who are not exposed to the right teachings of Islam. I feel if a non-Muslim hear something from media or any human being hear something in media he shouldn't take it for granted as our creator Almighty Allah says in the Quran whenever you get information check it up before you passed it to the third person.
Whenever you get the information it's important for a person to checks it whether it's right or wrong, as far as the message of Islam is concerned what if a non-Muslims is living in an island or living somewhere where he doesn't have any knowledge of Islam. First, its the duty of every Muslim to convey the message of Islam and irrespective whether we convey or not.

Our creator Almighty Allah says in the Quran that soon we shall show them our signs in the horizons and within themselves until it becomes clear to them that it is the truth.

There was some survey done in 1950 in 2 tribes. these two tribes did not come in contact with modern civilization till as late as 1950. When the researchers went and tried to find out what was their way of life, these people they believe that God is one they believe He alone should be worship and they believe He didn't begot anyone and they did the prostration (Sajdah).

It was everything of Islam so when no external influence comes on the human being that person submits his will to God.
Prophet Muhammad (pbuh) said: Every child born as a Muslim. Muslim means a person who submits his will to God, later on, that person may be influenced by his parents, by his teachers, by his elders and he may start doing idol worshiping and he may start fire worshiping and then he may go on the wrong path and that is the reason when a non Muslim accept Islam the more appropriate word is revert. He was a Muslim born as a Muslim, he gets converts to the wrong religion and then comes back to the original faith that is Islam.