Scientist Lists Tips for Muslims to Avoid Thirst During Ramadan 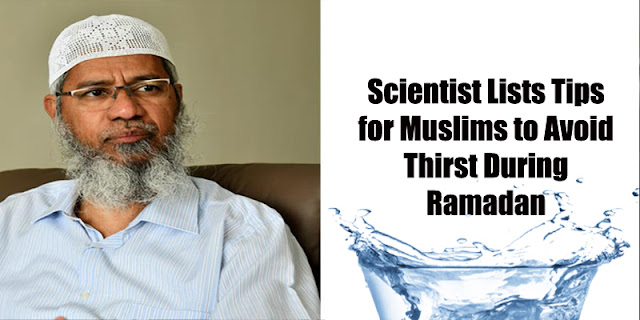 Fasting Ramadan is one of the Five Pillars of Islam and it’s considered obligatory for adult and healthy Muslims.

This ritual means abstaining from foods and drinks from sunrise to sunset, rendering the believer thirsty for several hours to feel the greatness of Allah’s creations and blessings, one of which is water.

To avoid severe feeling of thirst and have a healthy fasting ritual, doctor Ayman Al-Hady, from the Egyptian Meteorological Authority, laid down below tips for fasting Muslims in an interview with Egypt Independent on May 22.

He says: “Don’t drink huge amounts of water during Suhoor because the kidneys get rid of it in a few hours. Instead, you’ll be able to curb the feeling of thirst by drinking throughout a long period of time that extends between Iftar and Suhour.”

He further advised avoiding very cold water at Iftar as it constricts blood capillaries making it difficult to digest food. It’s preferable to drink liquids such as hibiscus, carob, and licorice, which don’t contain artificial colors and protect the body from many diseases. Such natural beverages hydrate the body and compensate for the loss of fluids.
3- No Salt

“Also please avoid salty foods such as pickles and salted fish as well as those that contain large quantities of spices, which increase chances of stomach acidity and thus increase the need for the body to process liquids, also increasing the feeling of thirst,” he advised.

The physician also called fasting Muslims to make sure that their Suhoor meals should include healthy amounts of water and fiber that stay long in the intestines, reducing the feelings of hunger and thirst.

“It’s recommended to eat fruits that contain dietary fiber and water such as watermelon and grapes. Watermelon contains 92% water,” he pointed out.

Moreover, Al-Hady asked believers to avoid drinking liquids that contain caffeine such as coffee and soft drinks due to their diuretic properties that cause the body to lose water quickly.

“Eat vegetables such as cucumbers, because they quench thirst and cool the body, helping to relieve nerve disorders. They contain cellulose food fibers that facilitate digestion, expel toxins, and clean the intestines,” he informed.
7- Delay Suhoor

Another advice from him is delaying the Suhoor meal until after midnight so that the fasting person can resist the feeling of thirst during the daytime hours. Fasting people also need to reduce their intake of sweets since they cause a higher degree of thirst.

For your cardiovascular health, “avoid drinks that may increase blood pressure, advising diabetics to be careful when eating or drinking high-sugar juices.”

In a prophetic hadith, Abu Hurayrah reported that Prophet Muhammad (PBUH) said: {Every action a son of Adam does shall be multiplied—a good action by ten times its value, up to 700 times. Allah says: With the exception of fasting, which belongs to Me, and I reward it accordingly. For, one abandons his desire and food for My sake}.