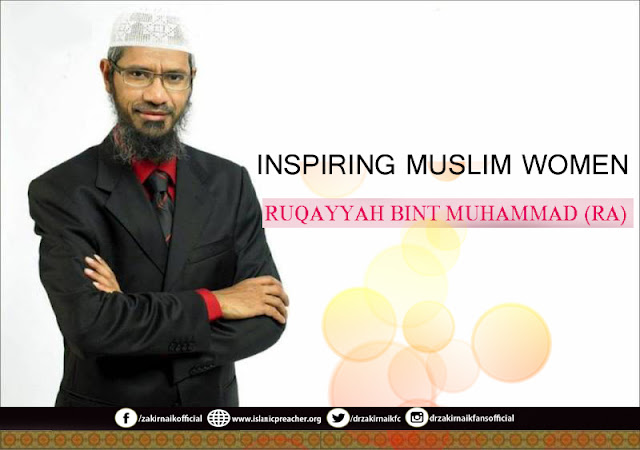 Today we will be talking about Ruqayyah bint Muhammad (Radiallah-hu-Anha), the second daughter of Muhammad (peace be upon him).

She was born three years after the birth of Zainab (Radiallah-hu-Anha). Initially, Ruqayyah was married to Utbah ibn Abu Lahab, the son of Arch enemy of Muhammad (peace be upon him). When Islam was declared, Abu lahab called his sons, Utbah and Utybah to divorce their wives, Ruqayyah and Umm Kulthum respectively.

When the cruelty of Quraysh increased, Prophet Muhammad (peace be upon him) permitted some of his companions to migrate to Abyssinia. Among them were Ruqayyah (Radiallah-hu-Anha) and her husband Uthman (Radiallah-hu-Anhu). While they were living in Abyssinia, they were blessed with a son, whom they named, Abdullah. Unfortunately, he died at the tender age of six.

Later on, they came back to Mecca and eventually migrated to Medina. Owing to her travels she is often called as “the lady with two Migrations.”
During the battle of Badr she fell sick and therefore Uthman (Radiallah-hu-Anhu) had to stay back with his ailing wife on the advice of Prophet Muhammad (peace be upon him) Narrated by Ibn Umar (RA):

1. Uthman did not join the Badr battle because he was married to one of the daughters of Allah’s Apostle (PBUH) and she was ill. So, the Prophet (PBUH) said to him, “You will get a reward and a share (from the war booty) similar to the reward and the share of one who has taken part in the Badr battle.”Sahih Bukhari Volume 4, Book 53, Number 359

Hadhrat Ruqayyah passed away on the same day that the battle of Badr was won, i.e. two years after her migration in 2AH. Since Prophet Muhammad (peace be upon him) was still at the battle ground he could not attend the funeral of his daughter. Hadhrat Ruqayyah (Radi-allahu-anha) was buried in the al-Baqi Cemetery in Medina. She was the first of Prophet’s beloved daughters to depart from this world.