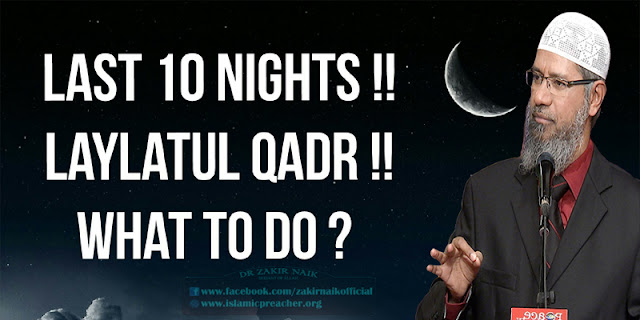 THE NIGHT OF DECREE IS BETTER THAN THOUSAND MONTHS. THE ANGELS AND THE SPIRIT DESCEND THEREIN BY PERMISSION OF THEIR LORD FOR EVERY MATTER, PEACE IT IS UNTIL THE EMERGENCE OF DAWN. {Surah 97, Ayah:3-5}

Asalamalaikum brother and sister, welcome to last 10 days of Ramadan

“Allah’s Messenger used to exert himself in devotion during the last ten nights to a greater extent than at any other time.” {Muslim}

Therefore, the last ten days of Ramadan require greater devotion and dedication towards making the most out of it. The lines below give some tips that can help effectively in this regard.

Aisha (RA) narrates in the famous hadith of Sahih Muslim, Aisha narrates that when the last 10 night came to the Prophet (PBUH), and she said three things number

1: he would tighten his belt and tighten his belt is an expression we should all understand, what does it mean you buckle down? We say it in English right what does it mean you’re going to buckle it down? Means you’re going to make things serious now, now is the final run this is the end, you can see it. Psychologically brothers and sisters when you see the finish line what happens? You give it your all best, you’re going to go and run harder, you’re gonna make sure you get there that is when the enthusiasm gets the highest, that is what Aisha (RA) said “HE WOULD TIGHTEN HIS BELT”, meaning these are the 10 nights to do everything and subhanAllah many Muslims, they have what is called Ramadan burnout syndrome that they burn out the first 20 days and then when the last 10 night come they are the weakest of Ramadan.
Some Muslims, unfortunately, are better on until 21st of Ramadan and this really shows they don’t understand. Note the first 20 days is exercise then when you see the finish line, that’s you give it your utmost and the good news my dear brothers and sister, that those amongst us who are not the energetic the first 20 days now is the time we can really show our true colors now we can demonstrate to Allah (SWT) that inshallah we have righteousness in us because at the end of the day what really matters is getting to that end of the line. Even when you see recaps of the races and whatnot, what part do they show? They only show the last bit, the very last bit when the runners come there we are in that, we’re already in 10 nights right.

Number 2: we would stay awake the entire night Ibn Taymiyyah narrates that we do not know of the prophet (PBUH) ever spending the entire night awake in ibadah except the last 10 nights of Ramadan. That as a habit as routine, he (PBUH) never spend the entire night in Ibadan except on the final 10 nights of Ramadan. So he would spend the entire night awake, he would not sleep at night, he would go to sleep after Fajr. So those amongst us who are able to spend the entire night awake worshipping Allah (SWT) now is the time to do so. I realize brothers and sisters that we live in times and in lands many of us have to go work at 7 am, 8 am the next morning we cannot spend the entire night awake fair enough but for those who can take off, Alhamdulillah and by the way my young brothers and sisters by young I mean everybody that’s in colleges and below Allah has blessed you that Ramadan is falling in the summer months. Allah has blessed you that you don’t have to go school right now, and take advantage therefore of this because 3 years from now, 4 years from now Ramadan will be coming but you are engaged in some business or jobs etc. so thank Allah right now you don’t have that take advantage. So these 10 nights he (PBUH) would spend awake the whole night and tries to do his best in ibadah, dhiker, dua, Quran.
Then the third thing “he (PBUH) would wake his family up” subhanallah, it is your responsibility not just awake up alone but also to awake your wives your children’s as well who are able to pray and those sisters who are not able to pray because of their monthly cycle they should still spend the night awake in dua and in dhikir, and in doing something of benefit just because you cannot pray dear sisters doesn’t mean you don’t do any ibadah they should lot of dua, they should always busy herself in dikhir and spend the night doing something that is pleasing to Allah. And brothers and sister those amongst you who do have to go to work the next morning and you’re not able to take off, fair enough but do something that you would not do for the rest of the nights spend half an hour, 1 hour, 2 hours in receipting the holy Quran, thanking Allah (SWT) for whatever you have for the sake yourself because these activities will act as a shield for you on the day of judgment.

[NOTE] The Hadith which says: Beginning of Ramadan is Mercy, its Middle is Forgiveness and its End is freedom from the Fire is a weak Hadith. The alleged hadeeth referred to that contains the reference to Ramadaan, as being divided into three so-called parts is a well known, albeit a very weak narration.