Keys for a Happy Marriage 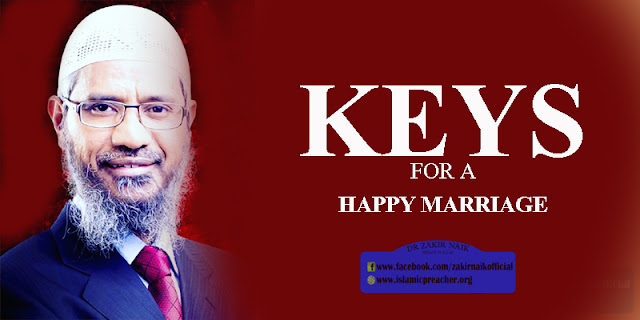 Two people marry when they are attractive, the attraction could be anything religious commitment, beauty, wealth or character traits and then they desire a romantic love to be deeply rooted in their marriage happily ever after. But creating a climate of love and passion for each other is hard work and will require genuine efforts from both sides because when the reality of life settles in the stresses can be overwhelming job, in-laws, kids, failures, conflicts, illness and more. Struggling with all of that and get making marriage work demands sacrifices, requires changing priorities dealing with differences coping with each other’s weaknesses leaving behind egos learning to ignore mistakes forgiveness, patience, kindness and much more. And it is then only then spouses can help each other in fulfilling the purpose of marriage life to worship and please the alert and build an environment to raise a family which will be valuable to Ummah.

The increasing rate of divorce in the all over the world is all because of the fact that there is no institute that could provide them with guidelines on how to live in a relationship where both the partners can contribute to the happiness of each other, share sorrows and take life forward. In this regard, Muslims are truly blessed, as Allah Almighty has given instructions to Muslims on how they can have a healthy marital relationship and live according to the Islamic way of life.

The first and prime important things that can help both the partners in the relationship to have a blessed and successful marital relationship so they have to take guidance from understanding Holy Quran. Both men and women need to take guidance from Quran pertaining to the roles and duties they have to play in the relationship in order to make the marriage successful. In Quran, Allah Almighty says: “MEN ARE RESPONSIBLE FOR WOMEN BECAUSE OF WHAT ALLAH HAS GIVEN ONE OVER THE OTHER (IN STRENGTH) AND THEY (MALES) SPEND (FOR FEMALE’S MAINTENANCE) FROM THEIR WEALTH. SO RIGHTEOUS WOMEN ARE OBEDIENT (TO ALLAH), GUARDING IN (HUSBAND’S) ABSENCE WHAT ALLAH WANTS THEM TO GUARD. BUT FOR THOSE (WIVES) FROM WHOM YOU OBSER5VE ARROGANCE AND REFUSAL, ADMONISH THEM; (IF THEY PERSIST), LEAVE THEIR BEDS; AND (LASTLY), TAP (PERCUS) THEM. BUT IF THEY COMPLY, SEEK NO FURTHER MEANS AGAINST THEM. INDEED ALLAH IS EVER EXALTED AND GRAND.” (4:34). in the above ayah of Quran, Allah Almighty has clearly mentioned the responsibility of a husband towards a wife and the way a wife needs to perform her role in return.

CARE FOR EACH OTHER:

The second important things to make the marital relation a successful one is caring for each other and also take care of the duties imposed on them. Usually women are associated with the role of taking care of the children’s and the property (including herself) in absence of their husbands. However, males are also responsible for taking care of the family and one way of doing so is by spending from their income on the well being and happiness of the family members. Prophet Muhammad (PBUH) said in one of His hadith: “THE BEST AMONG YOU IS WHO IS BEST TO HIS FAMILY” (Tirmidhi)

Islam in general has forbidden anger as it leads to all kinds of corruption; even anger is considered as the base for every abuse. Therefore, in a marital relationship, both husband and wife need to control their anger, as when the anger is control, the ultimate result is they both listening to each other and try to figure out things. “THE STRONG MAN IS NOT THE ONE WHO CAN WRESTLE, BUT IT IS THE ONE WHO CAN CONTROL HIMSELF WHEN HE IS ANGRY.” (BUKHARI)

If you’re not prepared to spend time with your wife, if you are too embarrassed to take her somewhere and to spend time with her, why did you get married and why did you waste somebody’s life. If you don’t want to talk her correctly why did you marry? Same applies to women if you are disturbed, don’t want to talk someone, spend time so you have no right to waste someone’s life. Many teaching form our beloved Prophet Muhammad’s (PBUH) that signifies to have fun with her wives. I would like to write down here one hadith that clearly emphasis to have fun with your wives

Aisha (RA) reported that she accompanied the Prophet in a travel when she was still slim. The Prophet told people to move forward and then he asked Aisha to race with him. They had a race and Aisha won. In a later travel, when Aisha had forgotten the race and had already gained weight, the Prophet told her to race with him again. She declined, “How can I race with you while I am in such a condition?” The Prophet insisted and they did have a race. The Prophet won this time. He laughed then and said, “Now, we are even.” (Authenticated by Al-Albani)