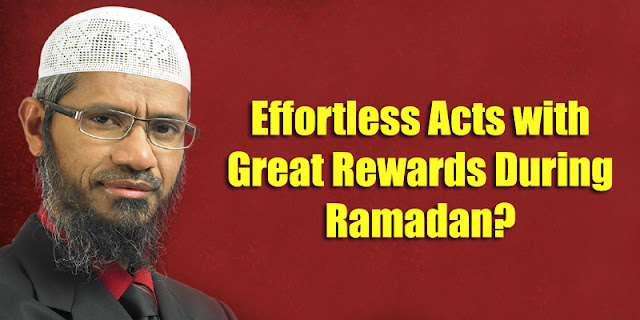 Allah Almighty has facilitated for us His remembrance and the communication with Him and the means to earn rewards.

So, for some recommendations, the below acts are almost effortless, but they have enormous reward, Insha’Allah, if done with the right intention.

For example, while taking a break from work, waiting in the elevator, commuting, walking to your destination, cooking … etc., you could earn numerous rewards by doing the following:

First of all, remember Al-Fatiha and the last verses of Chapter 2.

Ibn ‘Abbas (May Allah be pleased with them) reported:

While Jibril (Gabriel) was sitting with the Messenger of Allah (peace be upon him), he heard a sound above him. He lifted his head and said: “This is a gate which has been opened in heaven today. It was never opened before.” Then an angel descended through it, he said: “This is an angel who has come down to earth. He never came down before.” He sent greetings and said: “Rejoice with two lights given to you. Such lights were not given to any Prophet before you. These (lights) are: Fatihah-til-Kitab (Surat Al-Fatihah), and the concluding Ayat of Surat Al-Baqarah. You will never recite a word from them without being given the blessings it contains.” (Muslim).

Also Chapter 112 of the Quran:

The Messenger of Allah (peace be upon him) said:

Allah divided the Quran into three parts, and He made: “Say: He, Allah is One” [Surah al-Ikhlas] one part out of the (three) parts of the Quran. (Sahih Muslim).

Abdullah bin Khubaib (may Allah be pleased with him) reported:

The Messenger of Allah (peace be upon him) said to me, “Recite Surat Al-Ikhlas and Al- Mu’awwidhatain (Surat Al-Falaq and Surat An-Nas) three times at dawn and dusk. It will suffice you in all respects”. (Abu Dawud and At-Tirmidhi).

Narrated ‘Abdullah bin Mas’ud: “Allah has not created in the heavens nor in the earth what is more magnificent than Ayat Al-Kursi.” Sufyan said: “Because Ayat Al-Kursi is the Speech of Allah, and Allah’s Speech is greater than Allah’s creation of the heavens and the earth.” (At-Tirmidhi)

“Allah is free from imperfection and I begin with His praise, as many times as the number of His creatures, in accordance with His Good Pleasure, equal to the weight of His Throne and equal to the ink that may be used in recording the words for His Praise”.

Juwairiyah bint Al-Harith (may Allah be pleased with her), the Mother of the Believers, reported:

The Prophet (peace be upon him) came out from my apartment in the morning as I was busy in performing the dawn prayer. He came back in the forenoon and found me sitting there.

The Prophet (peace be upon him) said, ‘Are you still in the same position as I left you.’ I replied in the affirmative. Thereupon the Prophet said, ‘I recited four words three times after I had left you. If these are to be weighed against all you have recited since morning, these will be heavier. These are:

Subhan-Allahi wa bihamdihi, `adada khalqihi, wa rida nafsihi, wa zinatah `arshihi, wa midada kalimatihi [Allah is free from imperfection and I begin with His praise, as many times as the number of His creatures, in accordance with His Good Pleasure, equal to the weight of His Throne and equal to the ink that may be used in recording the words for His Praise]’. (Muslim)

6- CALL YOUR PARENTS, CHECK ON THEM AND/OR CHEER THEM UP

– “Our Lord, forgive me and my parents and the believers the Day the account is established.” (Quran 14:41)

– Make duaa, asking for whatever you want from Allah.

– Make duaa for parents and people you love.

– Send charity donation online or via sms (there are plenty of trustworthy organizations that accept donations in this manners for significant causes.)

Abdullah bin ‘Amr bin Al-‘As (May Allah be pleased with them) reported: I heard the Messenger of Allah (peace be upon him) saying:

“Whoever supplicates Allah to exalt my mention, Allah will exalt his mention ten times.” (Muslim)

– Praise and give thanks to Allah sincerely

The uttering of the words: “Subhan-Allah (Allah is free from imperfection), Al-hamdu lillah (all praise is due to Allah), La ilaha illallah (there is no true god except Allah) and Allahu Akbar (Allah is the Greatest)’ is dearer to me than anything over which the sun rises. (Muslim)

So, while working throughout the day, we can remember Allah to have balance in our lives and so that life won’t absorb us or take us away from the path of Allah that has been facilitated for us.