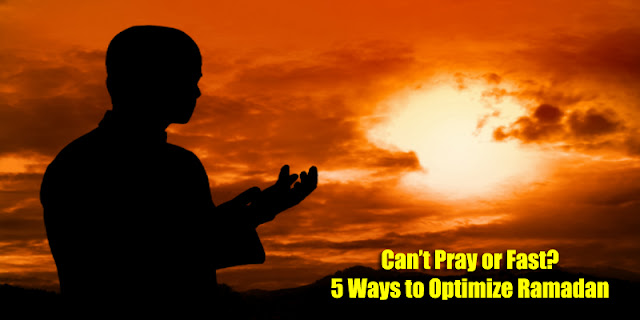 There are people in Ramadan who, for various reasons, cannot fast, and cannot do their acts of worship to their fullest potential.

There are others such as doctors and surgeons who may have to work long periods of time which doesn’t allow them the luxury of praying Taraweeh or Tahajjud.

So, what does someone do in times like these? Here are 5 ways we can maximize Ramadan even if we have a very unforgiving situation in life!

1) UNDERSTAND THAT YOUR INTENTIONS COUNT

A famous hadith in Muslim quotes the Prophet (peace be upon him) as saying:

Allah does not look at your appearance or your wealth but looks at your heart and actions. (Muslim)

The fact that your heart yearns to worship Allah, to fast, to pray the long nights is in and of itself an act of worship for which Allah is giving you reward.

The fact that you feel like you are missing out might in fact be giving you a lot of rewards without you even understanding it. For a sister menstruating or in post-natal bleeding, it could be even better. Allah says in the Quran:

Whoever obeys God and His Messenger, stands in awe of God, and keeps his duty to Him will be triumphant. (24:52)

So by not praying, not fasting and not reading Quran you are in fact worshiping Allah because you are obeying His commandments and the command of the Prophet through your activities.

Therefore, never feel that Allah is not giving you the opportunity. In fact, you are being rewarded anyway. A scholar once said:

“Her praying while pure is worship and her refraining from prayer while menstruating is worship. All of it is worship.”

The Prophet Muhammad (peace be upon him) said:

Every Muslim has an answered supplication every day and night [of Ramadan]. (Narrated by al-Bazzar and authenticated by Imam al-Albani)

There is no harm in making du’a, and in fact it is an amazing act of worship that can be made at any time and place. Keep making lots and lots of du’a. It doesn’t need anything other than asking Allah for good. Even if you are stuck on a hospital bed, you can call upon Him and He will respond.

Prophet Muhammad (peace be upon him) said:

Shall I tell you about the best of deeds, the most pure in the sight of your Lord, about the one that is of the highest order and is far better for you than spending gold and silver?

Allah has kept the door to the best of deeds open for you— make the best use of it. All it takes is repeating often the words of remembrance whatever state you may be in.

The famous jurist and Hanafi scholar, Ibn Abidin recommended that a menstruating woman make wudu for each prayer time, sit in her usual place of worship, and make dhikr (remembrance of Allah) for the time it takes for her to normally pray so that she does not lose her habit of worship while in this state.

4) SEND BLESSINGS UPON THE PROPHET

No other deed did Allah mention that He does it, His angels do it, so believers do it too, except sending blessings upon the Prophet (peace be upon him).

5) GIVE GENEROUSLY IN CHARITY

I hope and pray that this Ramadan is the best for all the readers of this article. I hope that I have addressed an issue that has been the source of a lot of anxiety for Muslims around the world.

Let us all pray for a successful and accepted Ramadan.