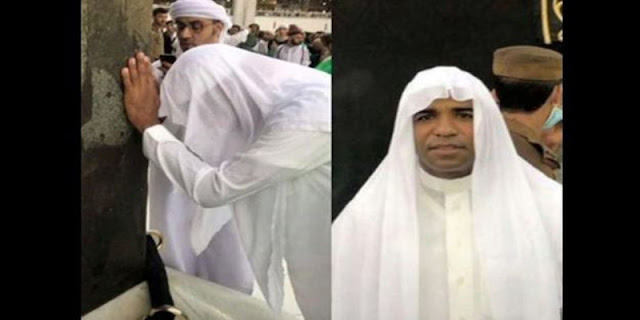 Just a few days after announcing his conversion to Islam, the Brazilian footballer Sergio Ricardo Neves was spotted in Makkah performing Umrah during Ramadan.

“Alhamdullilah … now I am a Muslim,” Ricardo tweeted before some fans showed footage of his visit to the Grand Mosque in Makkah during the weekend. In it, the sportsman can be seen dressed in white ihram garments.

Thousands have praised the footballer’s decision to visit the holy site and perform Umrah, wishing him well and praying his visit to the mosque brings him happiness and peace as he starts his life as a new Muslim.

On May 22, Ricardo announced that he has become a Muslim in a video posted online by former Saudi footballer Mohammad Sawid. “Alhamdullilah… I think you know this is the best decision I’ve made in my life,” the athlete said.

The Brazilian player retired in 2010 after an expansive career which saw him play for giant teams across the Middle East.
GOLDEN CAREER

The 45-year-old player played for major Brazilian clubs such as Corinthians and Vasco da Gama, in addition to Vitória and Botafogo. He then moved to the major Turkish side Fenerbahçe before being loaned to Sakaryaspor.

In 1999, he moved to Saudi clubs such as Al-Ittihad of Jeddah, the oldest club in KSA, which holds 33 domestic and continental trophies. It’s also the only Asian club to have won the AFC Champions League twice in a row.

The Brazilian Muslim also played for their Jeddah rivals, Al-Ahli, which was the first Saudi club to achieve the double national titles, the league and the King’s Cup in the same season in 1968, moreover, it’s the only Saudi club to do so more than twice in 1968, 1978, 1984 and 2016.

He further played for two years at the Riyadh-based Al-Hilal, Al-Ittihad’s national rivals, who won as much as 58 national and international titles, more than any other Saudi club. Continentally, Al-Hilal has a record six Asian Football Confederation trophies and in 2009 the club was awarded ‘Best Asian Club of the 20th Century’ by the IFFHS.