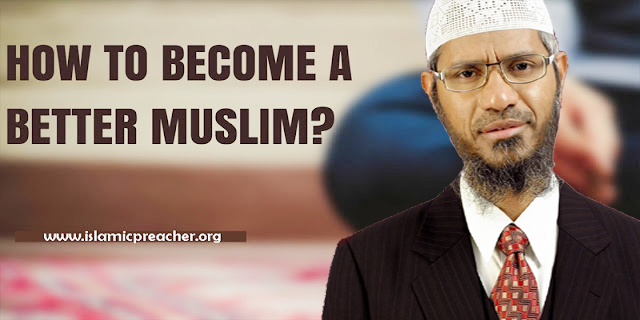 Being Muslim is the greatest blessing of Allah Almighty. We should try to become a better Muslim with the passage of time. We should know that being a better version of ourselves will help us to be more successful in this life and Hereafter too. Islam is the religion that covers more than just a faith in One Lord. Islam is a way of life. It is a pathway which has been laid by Allah Almighty around the ages of human history.

In order to become a good Muslim, it is essential that a Muslim firstly knows about the attributes and features that a good Muslim possesses. The knowledge of these key elements can only be obtained if the person starts learning about Islamic rules and principles. Keeping up with your religious practices is something that will strengthen your faith extremely. Read the Quran whenever possible, Find a collection of Hadith and read it regularly. You will start to feel a connection to Allah (SWT) and you will become used to Islam as a religion and way of life. For a Muslim Quran and Hadith of Prophet Muhammad (PBUH) stand guidance. If Muslim wishes to walk on the path of becoming a true Muslim, these two are what can help and guide a Muslim towards the right path. Hence, a Muslim must learn Quran with understanding as much as possible and also gain knowledge of the Hadith of Prophet Muhammad (SAW) in order to know and stay on the path of righteousness. In one of his Hadiths, Prophet (SAW) said: “He who loves my Sunnah has loved me, and he who loves me will be with me in Paradise.”(Tirmidhi)

The most important thing that is the heart of all the Islamic faith is to believe in Allah. It is the nature and dignity of this belief that shapes the life of a Muslim and makes him or her better Muslim. If someone has strong belief in Allah, he or she would satisfy in good and forbid bad, which is the essence of Islam.
3) RESPECT YOUR PARENTS:

Every Muslim is aware of the fact that parents are one of the greatest gifts of Allah Almighty and they play a great role in while parenting kids. Parents deserve utmost gratitude and the highest level of respect that a human can deserve. In Quran, Allah Almighty says: “And your Lord has decreed that you worship none but Him; and that you be dutiful to your parents. If one of them or both of them attain old age in your life, say not to them a word of disrespect, nor shout at them, but address them in terms of honor.”(Quran, 17-23). It is important that in order to become a good Muslim, one should respect the parents from the bottom of the heart and express this respect in actions as well.

Dhikr refers to the remembrance of Allah Almighty. Allah is the creator and sustainer of life; therefore, for a Muslim, it is essential to remember Allah all the time. The more a Muslim remembers Allah, the more he or she becomes conscious of His existence, which makes sticking to the right path easier and keeps a person motivated towards being a better and true Muslim.

5) SIT IN THE COMPANY OF GOOD MUSLIMS:

The person with which he/she sits or interacts with have a great impact on the personality of a person, therefore, if a Muslim wishes to become a good Muslim, it is necessary that he or she avoids the company of bad people and keeps the company of good Muslims. Prophet (PBUH) said in His hadith: “On the Day of Resurrection Allah Almighty will proclaim: “Where are those who have a mutual love for My Glory’s sake? Today I shall shelter them in My shade where there is no shade but Mine.”(Muslim). So, when Muslims befriend each other for the reason that they want to be better Muslims, then they will receive the benefits of this act in this world and in the world hereafter as well.

Ethics is one of the major teachings of Islam. For a Muslim religious life is of importance, yet, in order to be a true believer, the religious life needs to be complemented with kindness in the ethics domain as well. Therefore, whenever a Muslim finds a chance, he or she should strive towards being kind and take care of all those around and help them in the time of need. Be kind to others is also one of the things that we should adopt to become a better Muslim.

When someone hurts you, try to forgive them. It might be hard but just try to forgive. If you don’t forgive them for whatever they did and hold that against them for the rest of your life, you’ll just be hurting yourself more because it’s unhealthy to hold a grudge. It’s a good step to becoming a better Muslim.
8) ESTABLISH AN ISLAMIC CULTURE IN THE HOME:

9) SHOULD TRY TO GO MOSQUE:

One of the major factors that can help you in becoming a good Muslim is by getting into the habit of going to a mosque for prayer. The mosque is the hub of Islamic preaching and a place where a Muslim can worship Allah Almighty. Besides these elements going to mosque five times a day for prayer gives a Muslim chance to interact with other Muslims thus gives a chance to discuss Islam with other people and learn good things about Islam from them as well.

If there is one single thing that represents Muslim these days or has been a representative of Muslims since Islam is the obligatory prayers. Muslims all over the world prostrate in front of Allah Almighty five times a day. The prayers are an identity of a Muslim at a superficial level, however, at a deeper level, prayers represent the essence of Islam and a Muslim, which is that all the people are subjects of Allah and He as the Lord deserves praise, worship, and all the prayers.

Muslim has to strive towards being a better Muslim so that with the passage of time he or she becomes a better Muslim and on the Day of Judgment rises among the blessed ones. In order to become a good Muslim, you will have to go for a holistic approach and gradually start adopting Islamic instructions in your life in all its aspect. May Allah help us to become a Better Muslims! Ameen