15 Common Errors Committed by Muslims in the Holy Month of Ramadan? 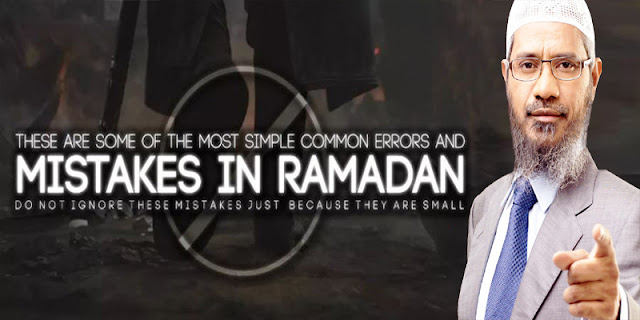 Today I am going to post 15 common mistakes which every Muslim committed in the month of Ramadan so make sure you share them with your family and friends so they can realize their mistake.

(1). Many people they skip the sahoor.

(3). Many Muslims delay opening the fast, they delay iftaar and Prophet Muhammad (peace be upon him) said, “The people will be good as long as they hasten in breaking the fast” that means immediately after sunset they should break their fast.

(4). Many Muslims read un-authentic Dua during iftaar. The most authentic Dua as far as iftaar is concerned is “zehbah zamaha wa-abtil-latil urooqu wasa-bata ajar inshallah”. That means “my thirst is quenched, veins are moistened and the reward is written god willing”.
(5). And some people who read this dua when breaking the fast, they say it before breaking the fast. Before they put date in their mouth, they say it and it is contrary to the meaning. The meaning says that my thirst has been quenched and the veins have been moistened. So your thirst cannot be quenched before breaking the fast. So normally it is should be said after you eat the ‘khajoor’ after your water and you are satisfied, maybe after few minutes when you break the fast, then you read this dua.

(6). Many Muslims eat excessively during iftaar and many of them eat throughout the night.

(8). Many Muslims who perform taraweeh they read taraweeh very fast – 100 miles/hour. They try to finish in a short time and they defeat the purpose in fact you should read it at a moderate pace so that people will understand and they grasp the message of Allah subhanwatala.

(9). Those who go for itakaaf in the mosque many of them socialize during itakaaf as though it is a time to meet people and friends. It is totally contradictory to sunnah.

(10). Many of the Muslims think that the ‘laylatul qadar’ (night of power) is on the 27th night of Ramadan and they only worship Allah subhanwatala in this night. Infact our beloved Prophet Muhammad (peace be upon him) said, “search for the lylatul qadar in the odd nights of the last ten days”. So lylatul qadar can fall on 21st, 23rd, 25th, 27th or 29th.
(11). They spend their time in ramadan in unproductive work rather than spending in dhikir and worshipping Allah subhanwatala. Also they should spend time in offering besides the compulsory salaah, the nawafil – the voulantary salaah and the sunnah salaah.

(13). They should ask for forgiveness, this is the month of forgiveness.

(14). They should read the Quran as much as possible, to get the blessing of Allah subhanwatala.

(15).They fast and keep themselves hungry but basically they are nor mentally prepared for their fast and it as though they are staying hungry, but the main purpose of fasting is to aquire Taqwah (God consciousness, piety).