Who Was the First Man to Write With a Pen? 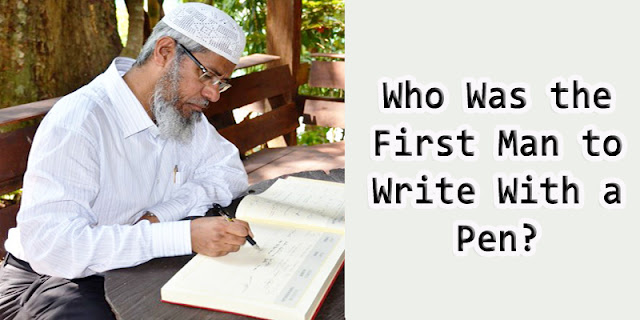 Allah has praised Idrees (alaiyhis salaam) - Enoch, describing him as being a prophet and truthful. He is mentioned in the Qur'an:"Verily! He was a man of truth (and) a prophet. We raised him to a high station. (Ch 19:56-57 Quran).

He called the people back to his forefathers religion, but only a few listened to him, while the majority turned away. Prophet Idrees(peace be upon him) and his followers left Babylon for Egypt. There he carried on his mission, calling people to what is just and fair, teaching them certain prayers and instructing them to fast on certain days and to give a portion of their wealth to the poor.
It is reported that he was the 1st to invent the basic form of writing. Ibn Ishaq has mentioned that he was the first man to write with a pen.

Some of his wise sayings are:

Happy is he who looks at his own deeds and appoints them as pleaders to his Lord.

None can show better gratitude for Allah's favors than he who shares them with others.

Do not envy people for what they have as they will only enjoy it for a short while.

He who indulges in excess will not benefit from it.

The real joy of life is to have wisdom.