What the Prophet Says About People with No Sense of Shame 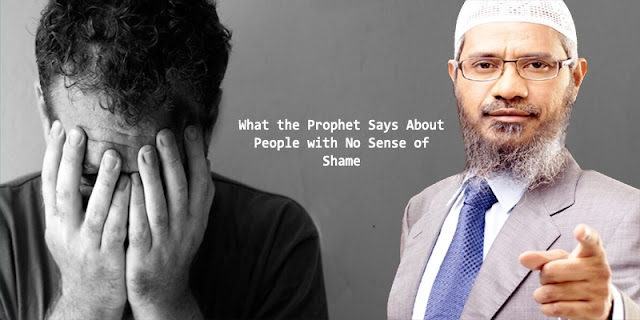 `Uqbah ibn `Amr (may Allah be pleased with him) reported that the Prophet (peace and blessings be upon him) said:

“Among the early prophetic teachings that have reached people is this: ‘If you do not have hayaa’ (feel shame), do what you wish’” (Al-Bukahri)

The word hayaa’ has a bigger meaning than “shame” which sometimes comes with a negative connotation.Hayaa’ may include shame in a positive meaning; may include shyness; and may include modesty.

So, how do we understand the statement “If you don’t have hayaa’ do as you wish“?

First of all, it can be looked at in the context of a threat like when somebody, for example, say to you, “go hit me if you want.” Allah Almighty used that style in the Quran when he said:

{Indeed those who inject deviation into our verses are not concealed from us.

So, is he who is cast into the Fire better or he who comes secure on the Day of Resurrection?

So, this is a threat. It is mentioned in the form of a command but it is not OK to do it.

Also in the other verse in Surat Az-Zumar, Allah Almighty says, {warship whoever you want to besides Him} (Az-Zumar 39:15) So again it is meant as a threat.

Another way of understanding the hadith is that it indicates the importance of hayaa’ as a quality of the heart. When the Prophet (peace and blessings be upon him) says that if you do not have hayaa’ then do whatever you wish, it means that what stops you from doing the wrong is the hayaa’ itself.
So if a person is missing hayaa’ he is missing something much bigger as clarified by ibn `Abbas when he said that hayaa’ and Iman are linked closely together; if one of them disappears the other one follows. So if the hayaa’ is missing, something much bigger is missing.

There is a third way of looking at the hadith: Hayaa’ can be perceived as an indicator or a litmus test, so to speak. If you do not have hayaa’ or feel shame upon doing something then most likely it is OK to do. That is in line with the other hadith of the Prophet, “Check your heart for an answer” (Ahamd). But this of course is to be used in the absence of a clear text or a clear indicator.

So, what exactly is hayaa’ and how does a person actually get it? I think that is what we are looking for at the end.

Hayaa’ can be looked at as a feeling of discomfort or tightness that you feel when/before doing something shameful. So it is a feeling that would prevent a person from doing a prohibition or from abandoning an obligation and consequently,hayaa’ becomes something positive.

Hayaa’ can be natural and can be acquired. The sad thing is just as it can be acquired, it can also be lost. A person can gradually lose this quality which is connected strongly to Iman by being exposed to something wrong ad being habituated to the sin.

When you see a sin for the first time it makes you feel really uncomfortable but gradually you become so habituated to it and so used to it. Eventually, it does not move anything in your heart anymore and as a result of the hayaa’ being lost from the heart.
But at the same time, one can acquire hayaa’ gradually, just as it is lost gradually.Hayaa’ can be acquired by learning more about Allah Almighty; by learning about His greatness; about Him seeing everything.

There is another beautiful kind of Hayaa’, that is, while learning about Allah the Almighty, you have this feeling of hayaa’ that whatever I do for Allah does not befit His greatness. This creates a feeling of shame that I am not doing enough; I am not fulfilling what I am supposed to do before Allah because Allah always deserves better. And as such, this will motivate you to do better and to perfect what you are doing hoping to satisfy your obligations towards Allah, knowing, in the meantime, that it always can be better.