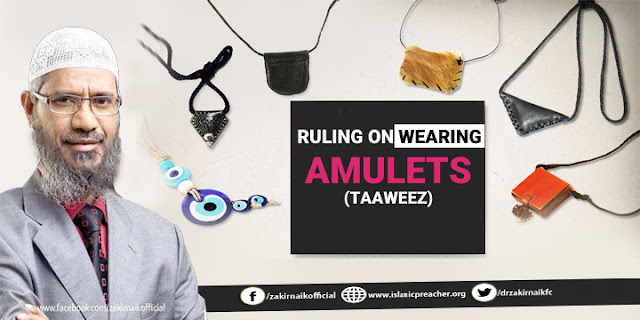 All Praise be to Allah

Wearing an amulet is shrik and must be avoided. We will try to understand this on the basis of Hadith of our beloved Prophet Muhammad (Peace be upon him).

1. It was narrated from ‘Abd-Allaah ibn Mas’ood that the Prophet of Allaah (peace and blessings of Allaah be upon him) said:

“The Prophet of Allah (peace and blessings of Allaah be upon him) disliked ten things: Yellow colouring, meaning khalooq (a perfume made from saffron), dyeing grey hair, trailing the lower garment, wearing a gold ring, throwing dice, a woman adorning herself before people who are not her mahrams, using spells (ruqyah) except with the Mu'awwidhatan, wearing amulets, coitus interruptus, and having intercourse with a woman who is breastfeeding a child; but he did not declare them to be prohibited.”

2. It was narrated from Zaynab the wife of ‘Abd-Allaah ibn Mas’ood from ‘Abd-Allaah that he said:

3. It was narrated that ‘Uqbah ibn ‘Aamir said: I heard the Messenger of Allaah (peace and blessings of Allaah be upon him) say:

This hadeeth was classed as da’eef by Shaykh al-Albaani in Da’eef al-Jaami’, 5703.

4. It was narrated from ‘Uqbah ibn ‘Aamir al-Juhani that a group came to the Messenger of Allaah (peace and blessings of Allaah be upon him) [to swear their allegiance (bay’ah) to him]. He accepted the bay’ah of nine of them but not of one of them. They said, “O Messenger of Allaah, you accepted the bay’ah of nine but not of this one.” He said, “He is wearing an amulet.” The man put his hand (in his shirt) and took it off, then he (the Prophet (peace and blessings of Allaah be upon him)) accepted his bay’ah. He said, ‘Whoever wears an amulet has committed shirk.”

This hadeeth was classed as saheeh by Shaykh al-Albaani in al-Silsilah al-Saheehah, 492.

Amulets and talisman are things that are made from animal bones, pearls and strings, and are worn on the necks or arms or hung up in houses or cars in order to ward off evil. There are various kinds of amulets.

If an amulet is made with something other than Quranic verses or duaa or if it contains strange words and symbols that cannot be understood, then there is no difference in the opinion of scholars that it is haram and is considered as shrik.

If you happen to wear an amulet and do not know what is written inside of it, you must immediately check it out. If it is so, destroy it.

The symbols and letters are representing and seeking the help of Jinn or shayateen. It means you are asking help from the creation of Allah, rather that Allah Himself. Hanging them up or wearing them, doing spells (ruqyah) using the names of shayaateen (devils), and even being attached to those shayaateen, seeking refuge in them, slaughtering animals for them, asking them to ward off harm and bring benefits are actions which are pure shirk.
Abu Dawood narrated that ‘Eesa ibn Hamzah said: “I entered upon ‘Abd-Allaah ibn ‘Akeem and his face was red due to high fever. I said, ‘Why don’t you hang up an amulet?’ He said, ‘We seek refuge with Allaah from that. The Messenger of Allaah (peace and blessings of Allaah be upon him) said: “Whoever hangs up anything will be entrusted to its care…”’”

If an amulet contains any Quranic verse, there is the difference in opinion of scholars in this matter. Some say it is permissible while others say it is not permissible. But the correct view is that it is haram.

Not allowing it is a safer option as it prevents any meant that may lead to Shrik. Sometimes an amulet may start with a Quranic verse but continues with some strange mumbo-jumbo words than that leads to shrik. They (amulet makers) divert the hearts of the common folk from putting their trust in Allaah and make them dependent on the things that they have written, and most of them frighten the people, before anything even happens to them. They make them to rely on them with the help of shayateen. He controls them emotionally and shayateen whispers into the minds of innocent people and they end up believing them.

When the heart of the ignorant fool is filled with fear of what has been described to him, he turns away from his Lord and turns to this charlatan with all his heart and soul; he puts his trust in him and relies on him instead of Allaah and believe that they (amulet makers/magicians) are the ones to solve their problems. The ask for the amulet and get one. They hang it up without seeing or caring what is written inside of it. They get the minor relief from it and do you think that this relief is minor shrik? No, it is a major Sin. They have abandoned Allah and put their trust in something else. They don’t believe that Allah will help them. They don’t trust Allah.

“Say: ‘Who can guard and protect you in the night or in the day from the (punishment of the) Most Gracious (Allaah)?’ Nay, but they turn away from the remembrance of their Lord”

When such amulet that contains the verse of Quran (whether along with devilish mumbo-jumbo or without it) is hung up or worn by anyone, than he must remember that he is not always in state of purity. He wears it in state of major or minor impurity and never shows any respect to it, Walaahi none of the enemies of Allah have treated his book with much contempt as these fools who claim to be Muslim.

The Qur’aan was revealed to be recited and followed, for its commandments to be obeyed and its prohibitions heeded, for its information to be believed and its limits to be adhered to, for its parables and stories to serve as lessons, and for it to be believed in.

[Aal ‘Imraan 3:7 ] But they(magicians) have ignored most of it and memorized few words merely to earn living from it. The lead muslims astray. And Muslims too don’t think logically and reasonably and follow these fanatics. Quran is sent to guide us in life, not to fold in and cover in black cloth and hung in the neck. It is not benefiting like that.
If a king or a governor wrote a letter to his subordinate, telling him to so such and such and not to do such and such, commanding the people in your city to do such and such and forbidding them to do such and such, etc., and he took that letter and did not read it or think about its instructions, and he did not convey that to those to whom he was commanded to convey it, but instead he took it and hung it around his neck or his arm, and did not pay any attention at all to what was in it, will it benefit anyone and also the king would punish him severely for that. So how about that which was revealed from the Compeller of the heavens and the earth, Who has the highest description in the heavens and on earth, to Whom is all praise in the beginning and at the end, to Whom all things return, so worship Him and put your trust in Him, He is sufficient for me, there is no god but He, in Him I put my trust and He is the Lord of the Mighty Throne.

A believer must ponder over the meaning of the book of Allah and try to implement the lessons therein in his life rather than hanging it around his neck and lest fall into shrik of any kind. To be on safer side, avoid all kind of Amulets.