Things Every Muslim Home Should Have 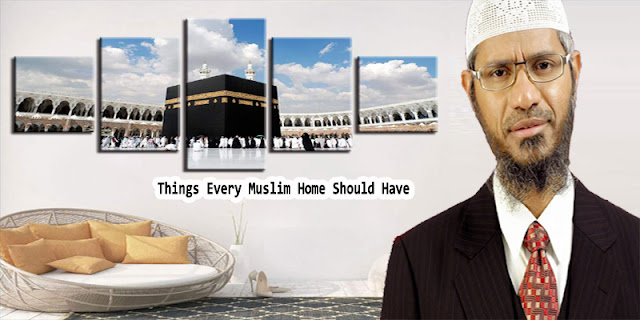 WHEN I did some research on this topic, what I mostly got was the usual: a Qur’an, a prayer rug, a copy of the translation of the Qur’an, etc. And of course those are important things, but I wanted more.

I’m sure almost every Muslim home does have the above-mentioned items, and I’m sure that we don’t need a whole article out there stating that they need it.

So it got me thinking: What should every Muslim home have then, besides the typical list?

In general, there is more focus on the negative than the positive, more blame found than praise given, especially where children are involved. Don’t be afraid to love openly, show affection, and appreciate where necessary.

The understanding that Allah is the Most Appreciative of every little thing we do is reinforced when it is experienced at home first.

And this hadith becomes easier to put into practice as well:

“And those who say, “Our Lord, grant us from among our wives and offspring comfort to our eyes and make us an example for the righteous.” [Qur’an, 25:74]

One of the meanings of “comfort to our eyes” is refuge from a storm.

Our homes should be a refuge from the storm outside – whether it is the injustice found in the world, or how rampantly Shaytan plays his role. We should find comfort in our spouses and children, and want to spend more time with them than on our gadgets that connect us back to the outside world.

Our homes should be a haven where we find solace in the remembrance of Allah, in practicing our deen, and where the many indecent acts found outside are kept outside.
3) QURAN:

Yes of course every Muslim home should have a Qur’an, but more important than having a book that adorns our shelves, that is taken out once a week when the Qur’an teacher arrives to listen to us recite, and every Ramadan in a race to finish it – more important than this occasional appearance is a home in which Qur’an is recited, learnt, understood and implemented.

How many of us can claim to know what Allah I tells us in His Book? How much have our lives changed from the knowledge present in these Words that take up space in our homes?

Muslim homes need to develop a relationship with the Qur’an where it is not just revered, but loved; where the words are not just recited beautifully, but curiosity sparked; where certain verses are not just taken out of context and argued over, but behaviour is altered based on the deep understanding of what is being said.

The Prophet Muhammad (PBUH) said: “The seeking of knowledge is obligatory for every Muslim.” [Tirmidhi]

Whether it is reminding each other that He is always watching, reminding of His mercy, or reminding that with Him lies the ultimate reward, a home where Allah is mentioned often is where more taqwa (consciousness of Allah) is cultivated.

In good times and bad, the family knows Who to turn to, because of the constant reminders that preside in the home.

Where a lot of homes fail in their Islamic upbringing is in assuming that just because the parents are religious, it will automatically rub off on the children too.

What most people don’t realise is that children imitate what they see more than what they are told to do, so praying on time, reciting Qur’an openly, saying the adhkar, and more are what they will subconsciously instil in their lives.

Homes where the men go to the mosque for salah, where ‘Bismillah’ is said before an action, where the family is openly respected, honesty praised, patience observed, and Allah remembered is a truly Islamic home.

We are told multiple times in the Qur’an to give for the sake of Allah as it is one of the most loved acts. The biggest translation of this at home is to have a sadaqah box where anyone can drop money into.

Spring cleaning is another great opportunity to cleanse our homes and ourselves of all the excess things that we collect and give them in charity. In addition to being generous with the outside world, the family should first be generous with each other, giving money, time, skills, and a helping hand where needed.
“And whatever you spend in good, surely Allah knows it well.” [Qur’an, 2:273]

Reading is the basic form of gaining knowledge, and the first order from our Rabb –

A home that is in the habit of reading creates a thirst for knowledge from a very early age, not to mention expanded vocabulary, stronger imagination, and is a beneficial past time.

Small libraries can generally be found in these homes – that can contain Islamic literature as well as secular, and bring about an open-mindedness and greater understanding of the world around, than those who don't.

Children who are a part of such households have a greater knowledge of Islam and its history than others, and an added benefit of these libraries is the convenience of having small books on hand that can be gifted to Muslims and non-Muslims alike.

The biggest indication of what a home is like is by the artwork visible on the walls. While Arabic calligraphy is beautiful, what is more beneficial are du’as and sayings that people can actually read and understand.

Du’as stuck where necessary – by the front door, bathroom door, by one’s mirror, on one’s cupboard, etc – and Islamic knowledge scattered around – whether they be fridge magnets, a framed list of the names of the Prophets, common hadith, or profound ayat are simple visuals that stick in people’s minds and make a great difference in establishing an Islamic household.

Whether we attain one, a few, or all of these things, what matters is that we cultivate our homes and children to reflect our identity and responsibilities as Muslims.

Did you agree with this list? What are things that you think every Muslim home should have?