Surat An-Nas: What You Should Know About Quran’s Last Chapter 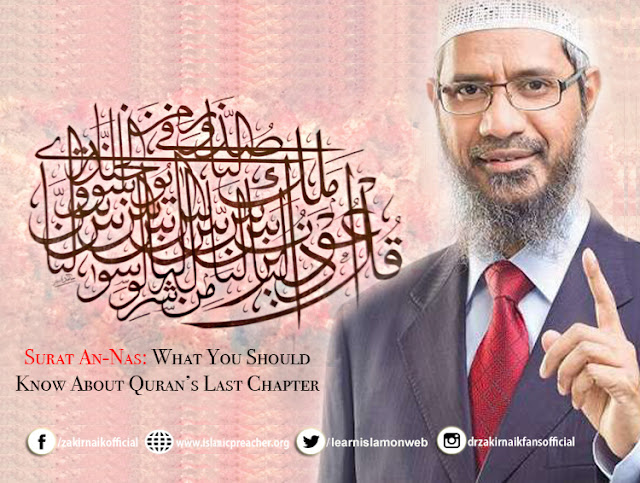 REVELATION AND SIGNIFICANCE OF THE SURAH

Hadith tells us that Surat An-Nas was revealed in Makkah and consists of six verses (ayahs).

“Do you not see that there have been verses revealed to me tonight the like of which has never been seen before. They are:

“Allah’s Messenger (PBUH) used to seek refuge with Allah from the jinn and from the evil eye until the Mu`wadhatain (i.e. the Surahs of Al-Falaq and An-Nas) were revealed.

When they were revealed, he started to recite them and not anything else.” (Al-Tirmidhi, Al-Nasa’i, and Ibn Majah)

Lady `A’ishah (May Allah be pleased with her) narrated that whenever Allah’s Messenger (PBUH) became sick, he would recite Surat Al-Falaq and Surat An-Nas and then blow his breath over his body.

When he became seriously ill, I used to recite (these two Surahs) and rub his hands over his body for its blessings. (Al-Bukhari)
OVERALL THEME OF THE SURAH

It calls upon everyone to seek refuge in Him from the evil of the whisperer, be it Satan or a bad companion, who whispers evil in the breast of people (i.e. Satan), or their ears (i.e., the human bad company).

KEY CONCEPTS IN THE SURAH

Lordship, Sovereignty, and Divinity are three Divine Attributes one needs to take a thorough look at:

The word “Rabb” (Lord), is used in reference to the Lord of the universe (Allah) and people, as we say, “Rabb ad-dar” (lord of the house), etc. As for the meaning of the term “Lord”, it stands for the One Who creates, sustains, and cares about His servants.

The term “God” should not be used with other than Allah the Almighty. He is the one and only deity Who deserves to be worshipped.

Consequently, these attributes mean that Allah is the Creator and Owner of everything.

Hence, He orders His Messenger and his ummah to seek refuge in Him from the whisperings of the evil ones and rely on Him alone at all circumstances.

Never will they be able to defy such malicious whisperings without the aid and assistance of the Lord, the King, the One True God.

The whisperer mentioned in the Surah is the devil, who whispers and then when he is obeyed, he withdraws. Or, when one mentions Allah, he withdraws as per many scholars of Tafsir.

Therefore, when one realizes this and knows that those whisperers are always ready for him, one should be vigilant at all times to defend oneself through seeking aid from Allah the Almighty.

No one knows how the Jinn whisper to man, though we find the impact of such whisperings in our lives.

In a similar vein, we know that the battle between the son of Adam and Satan is an ongoing through the end of days. When man becomes heedless of his guard and protection, he is the one to blame!

It is narrated by Ibn `Abbas from the Messenger of Allah (PBUH) that he said:

“The devil stays upon the heart of the Son of Adam. So when he remembers Allah, he (the devil) withdraws. When he becomes absentminded, he (the devil) whispers.”
THE IMPACT OF BAD COMPANIONSHIP

There are many forms of whispering made by bad human beings such as:

* The bad company of the one who whispers with evil to his unsuspecting companion.

* The bad company around each and every person in charge of something who make a tyrant and an oppressor out of him through hypocritical attitudes and misguiding information.

* The talebearer who goes about communicating lies, calumniations, and observes backbiting.

* The lust-dealer who beautifies for mankind lusts and unlawful desires until they fall down into them.

* The evil companions who facilitate lusts, encourage people towards usury, and invite others to adultery of all kinds. Those who hold tables for gambling and drinking wine. Not to mention selling all these sins in the best ways of persuasion. Those are the devils of mankind indeed!

* The bad company of the one who calls upon a new Muslim to turn his face in the other direction, away from Islamic teachings. They seize the opportunity of the Muslim community’s negligence and inattention.

Indeed, as humans, we are too weak to defy such whisperings unless relying upon and resorting to Allah the Almighty and seeking refuge in Him from such whisperings and those delivering them. Those whisperers can be made through Satan or one’s evil companions!