Signs Of Black Hole Were Mentioned In Quran 1,400 Years Ago 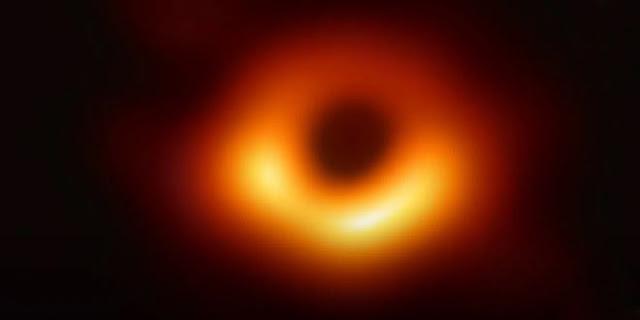 Past Wednesday astronomers have revealed the highly awaited picture of the Black Hole, which is a dark core, circled with an orange halo of gas and plasma.

Blackhole was considered as an unseeable thing in the past, but with the help of Event Horizon Telescope (EHT) made it easier for astronomers to be able to see it. As the photo released by NASA, the position of Black Hole is in the center of Galaxy M87, a huge galaxy around 55 million light years away from the earth.

WHAT IS A BLACK HOLE?

As per the National Aeronautics and Space Administration (NASA), Blackhole is a place in space where gravity becomes so strong that even light can not escape it. Such things form when a huge star collapses in upon itself in a supernova blast.
HOW DID ASTRONOMERS TOOK THE PHOTO OF BLACK HOLE?

To take the picture of the black hole, EHT linked the telescopes all around the world to form an Earth-sized VT (Virtual Telescope) with high sensitivity and resolution. Heino Falcke, a professor at EHT Science Council told in the press conference that the black hole is like a Disc of Glowing Gas.

''If immersed in a bright region, like a disc of glowing gas, we expect a black hole to create a dark region similar to a shadow - something predicted by Einstein's general relativity that we've never seen before. This shadow, caused by the gravitational bending and capture of light by the event horizon, reveals a lot about the nature of these fascinating objects and allowed us to measure the enormous mass of M87's black hole''

WHO IS KATIE BOUMAN?

Katie Bouman is the person who made the picture of Black Hole real, she is an MIT (Massachusets Institute of Technology) graduate. Including other 200 scientists from the different parts of the world, Dr. Katie developed a series of an algorithm that converted all the telescopic data into a historic photo shared by the world’s media.

DID YOU KNOW QURAN HAS DESCRIBED ALL ABOUT BLACK HOLE ABOUT 1400 YEARS AGO?

All the details we know about it is linked with the journey of Isra and Miraj of Holy Prophet PBUH which was a gift to him by Allah SWT. Along with these Quranic Verses, Verse Number 12 to 18 of Surah Najm described these events in words.

While he was in the higher [part of the] horizon. So will you dispute with him over what he saw? And he certainly saw him in another descent. At the Lote Tree of the Utmost Boundary - Near it is the Garden of Refuge - When there covered the Lote-tree that which covered [it]. The sight [of the Prophet] did not swerve, nor did it transgress [its limit]. He certainly saw of the greatest signs of his Lord. (Surah Najm verse number 12 – 18)
Clare Forestier, BBC presenter gave a detailed analysis of how Black Hole is being discussed in the Holy Quran and how it is linked with the night journey of Holy Prophet PBUH

* Space is covered in darkness. These black holes are the darkest and normal people can’t even see it with their human eye as it never bypass through the boundary of that area.

* Forestier further said in the video that it was only Holy Prophet PBUH who saw one of the greatest signs during his night journey, which can be the black hole.

* Quran says about the Black Hole that it is a Lote Tree, and if we shape the tree, it will look similar to what scientist have discovered in 2019.