Men and Women Have the Right to Seek Education in Islam 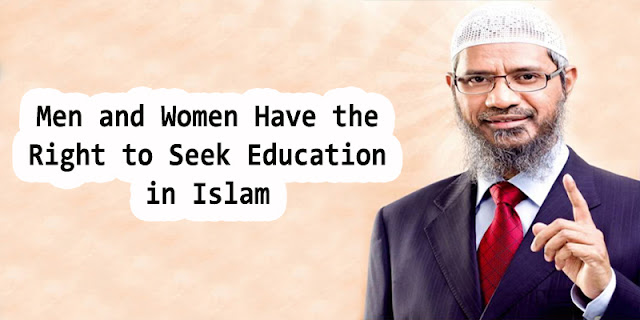 Education and knowledge are mandatory upon men and women in Islam.  Let us look at what Allah Almighty in His Noble Quran and His Messenger Muhammad peace be upon him said:

"....Are those equal, those who know and those who do not know? It is those who are endued with understanding that receive admonition.  (The Noble Quran, 39:9)"

"...Those truly fear God, among His Servants, who have knowledge: for God is Exalted in Might, Oft-Forgiving.  (The Noble Quran, 35:28)"

Narrated Abu Musa Al-Ashari: "The Prophet said, 'He who has a slave-girl and teaches her good manners and improves her education and then manumits and marries her, will get a double reward; and any slave who observes Allah's right and his master's right will get a double reward.'  (Translation of Sahih Bukhari, Manumission of Slaves, Volume 3, Book 46, Number 723)"

Slavery was practiced before and during the times of Judaism, Christianity and Paganism.  Islam came and eliminated slavery.  Please see the many articles about the liberation of slaves in Islam.

Narrated AbudDarda': "Kathir ibn Qays said: I was sitting with AbudDarda' in the mosque of Damascus.  A man came to him and said: AbudDarda, I have come to you from the town of the Apostle of Allah (peace_be_upon_him) for a tradition that I have heard you relate from the Apostle of Allah (peace_be_upon_him). I have come for no other purpose.
He said: I heard the Apostle of Allah (peace_be_upon_him) say: If anyone travels on a road in search of knowledge, Allah will cause him to travel on one of the roads of Paradise. The angels will lower their wings in their great pleasure with one who seeks knowledge, the inhabitants of the heavens and the Earth and the fish in the deep waters will ask forgiveness for the learned man. The superiority of the learned man over the devout is like that of the moon, on the night when it is full, over the rest of the stars. The learned are the heirs of the Prophets, and the Prophets leave neither dinar nor dirham, leaving only knowledge, and he who takes it takes an abundant portion. (Translation of Sunan Abu-Dawud, Knowledge (Kitab Al-Ilm), Book 25, Number 3634)"

Narrated AbuHurayrah: "The Prophet (peace_be_upon_him) said: If anyone acquires knowledge of things by which Allah's good pleasure is sought, but acquires it only to get some worldly advantage, he will not experience the arf, i.e. the odour, of Paradise.  (Translation of Sunan Abu-Dawud, Knowledge (Kitab Al-Ilm), Book 25, Number 3656)"

In the above Noble Verse and Sayings, we clearly see that knowledge and education are a must on both Muslim men and women.  Those who know are better than those who do not know.  Those who are rich in knowledge are the most who fear Allah Almighty, through glorifying Him, appreciating Him and Respecting His Mighty Power, for they would have more knowledge about Him than those who don't know.

So education to both men and women in Islam is essential.  Without it, Allah Almighty's Servants would have no idea about His "Scientific" Miracles and Signs that He Shows some of it to us through our normal science and logic.

Also, those who seek good knowledge and education will be granted Paradise and the Angels will lower their wings for them with great pleasure, and forgiveness will be asked for them.  The learned are considered the heirs of the Prophets.

We also clearly see that the improper worldly knowledge will not cause the person to enter Paradise.  So everything we seek knowledge for, better be for good cause to humanity.
So how come some Muslim extremists ban women from education?

Please know that the only country or group of Muslim extremists that ban women from education are the "Taliban" group in Afghanistan.  The rest of the 1.4 Billion Muslim populations don't have any laws that prohibit women to be educated or seek the highest academic degrees they desire.

Khadijah, Prophet Muhammad's first wife, was a business woman.   She actually used to travel on her camel and bargain with men and make deals with them!

Also, Aisha, one of Prophet Muhammad's wives, not only narrated so many of his Sayings, and taught so many Muslims many laws about Islam during his life and after his death, but believe it or not, she actually led an army of 60,000 Muslim men after our Prophet peace be upon him died.  That battle was called the "Battle of Camel".  It is a very popular battle.  Every Muslim knows it.

Allah says in Quran:
"O ye who believe! Obey God, and obey the Apostle, and those charged with authority among you. If ye differ in anything among yourselves, refer it to God and His Apostle, if ye do believe in God and the Last Day: That is best, and most suitable for final determination.  (The Noble Quran, 4:59)"

This was clearly defined by our Prophet peace be upon him:

Narrated 'Abdullah: "The Prophet said, 'A Muslim has to listen to and obey (the order of his ruler) whether he likes it or not, as long as his orders involve not one in disobedience (to Allah), but if an act of disobedience (to Allah) is imposed one should not listen to it or obey it.    (Translation of Sahih Bukhari, Judgments (Ahkaam), Volume 9, Book 89, Number 258)"