Coping With the Fear That Our Worship Will Not Be Accepted 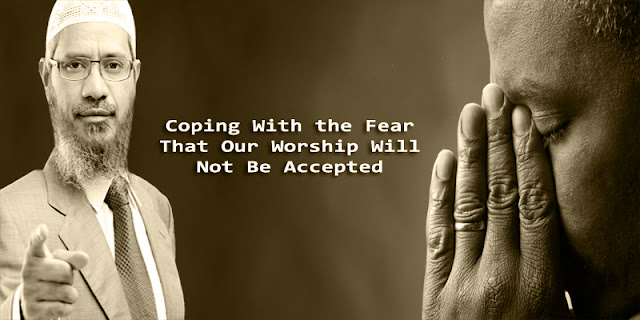 Dissatisfaction with our sincerity in worship and with our efforts for our faith is usually a good thing. It inspires us to greater efforts, deeper conviction, and a firmer resolve to please our Lord. It prevents us from being prideful and haughty and keeps us from looking down at others when we see their faults and shortcomings.

Sometimes, though, these feelings exceed their proper bounds and can turn destructive, especially if we start feeling that the worship that we are engaged in is not good enough to count; that Allah is not going to accept anything that we do. This can easily lead us down the dark road of despair, where we start to feel that we will never be forgiven and that we cannot hope to attain salvation.

Such feelings deprive us of the peace of mind, the tranquility, and the pleasure that we are supposed to find in worshipping our Lord. This can ultimately lead us to neglect our religious duties.

There are many reasons why we might suffer from these feelings. Sometimes, our distress is the result of our hearing well-intended but misguided exhortations from those who wish to encourage us to greater devotion in our worship. So often we are told how impossible it is to attain true sincerity and how difficult it is for us to work acts of righteousness that Allah will find acceptable.

We need to realize – and hold in our hearts with the greatest conviction – that Allah is merciful and that His mercy is vast. Indeed, He has promised his servants that He will reward them with the best of rewards.

Allah says: “So whoever does an atom’s weight of good shall see it.” [Sûrah al-Zalzalah: 7]

He says: “Whoever works any act of righteousness and has faith; his endeavor will not be rejected. We shall record it in his favor.” [Sûrah al-Anbiyâ’: 92]
Allah is most generous. Whenever He promises something, He fulfills His promise, but whenever He threatens something, He is quick to pardon.

We must consider how Allah so often in the Qur’ân speaks of His mercy. Indeed, when we read the Qur’ân, we need to contemplate on words like the following:

“But your Lord is most forgiving, full of mercy”[Sûrah al-Kahf: 58]

This is very important, because sometimes pessimism about our worship arises as a result of some evil deed that we have committed. Satan takes this opportunity to whisper into our hearts that we do not deserve Allah’s mercy, causing us to despair. We must seek refuge with Allah from this deception and not succumb to it. Instead, we need to sincerely turn to Allah and beseech His forgiveness, confidence in the knowledge that Allah forgives all sins.

Allah says: “Say: O my servants who have transgressed against their souls! Despair not of Allah’s Mercy. Truly, Allah forgives all sins. Allah is Oft-forgiving, Most Merciful.” [Sûrah al-Zumar: 53]

There is no sin that He will not forgive except that of a person who dies on unrepentant polytheism.

Allah says: “Allah does not forgive that anyone should set up partners with Him, but he forgives anything less than that to whom He pleases.” [Sûrah al-Nisâ’: 48]

This should encourage us to ask for Allah’s grace, knowing that He loves us to do so.

The Prophet (peace be upon him) said: “Allah is more pleased with the repentance of His servant when he repents than one of you would be if he were to lose his mount while traveling in barren land while it was carrying his food and drink. Then, if he were to despair of finding it and went over to a tree and laid down in its shade and while sitting there in hopelessness of ever seeing it again, he sees it standing before him.” [Sahîh Muslim]

The Prophet (peace be upon him) said: “I swear by Him in whose hand is my soul. If it were not that you sinned, Allah would remove you and bring forth a people who would sin and then seek Allah’s forgiveness so He could forgive them.” [Sahîh Muslim]
We should turn to the Sunnah of our beloved Prophet (peace be upon him) and read therein about Allah’s forgiveness. We should remember how Allah forgave a prostitute – a woman who lived by selling her sexual favors – only on account of a small mercy that she showed to a dog. How then shall it be for someone who strives to do right?

We must hasten to good deeds with the optimism that our sincere deeds will be well received.

We must not despair. “And who despairs of the mercy of his Lord, save those who are astray?” [Sûrah al-Hijr: 56]

Now here is something that we need to fear – for who among us wishes to be among those who are astray!