7 Reasons to Read the Book of Allah 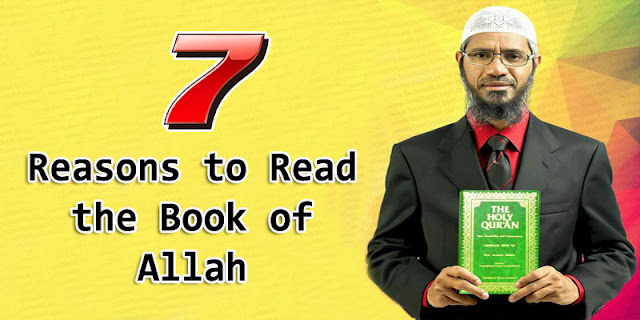 1. Inimitable: It dares you to disprove it. How? It says that humans cannot write a book like this even if they pooled all their resources together and got help also from the spirits. The Noble Qur’an said this 1,400 years ago and yet no one has been able to disprove it. Billions of books have been written, but not another one like the Qur’an.

2. Incorruptible: It is the only religious sacred writing that has been in circulation for such a long time and yet remains as pure as it was in the beginning. The Qur’an was kept intact. Nothing was added to it; nothing was changed in it; and nothing was taken away from it ever since its revelation was completed.

3. Unsurpassable: The Qur’an is Allah’s final revelation to humankind. Allah revealed the Torah to Moses, the Psalms to David, the Gospel to Jesus, and finally the Qur’an to Muhammad. Peace be upon Moses, David, Jesus and Muhammad. No other book will come from Allah to surpass His final revelation.

4. Indisputable: The Qur’an withstands the test of time and scrutiny. No one can dispute the truth of this book. It speaks about past history and turns out right. It speaks about the future in prophecies and it turns out right. It mentions details of physical phenomena which were not known to people at the time; yet later scientific discoveries prove that the Qur’an was right all along. Every other book needs to be revised to accord with modern knowledge. The Qur’an alone is never contradicted by a newly discovered scientific fact.
5. Your Roadmap for Life and Afterlife: The Qur’an is the best guidebook on how to structure your life. No other book presents such a comprehensive system involving all aspects of human life and endeavour. The Qur’an also points out the way to secure everlasting happiness in the afterlife. It is your roadmap showing how to get to Paradise.

6. Allah’s Gift of Guidance: Allah has not left you alone. You were made for a reason. Allah tells you why He made you, what He demands from you and what He has in store for you. If you operate a machine contrary to its manufacturer’s specification you will ruin that machine. What about you? Do you have an owner’s manual for yourself? The Qur’an is from your Maker. It is a gift for you to make sure you function for success, lest you fail to function.

It is a healing from Allah. It satisfies the soul, and cleans the heart. It removes doubts and brings peace.