10 Actions That Put A Person Beyond The Pale Of Islam 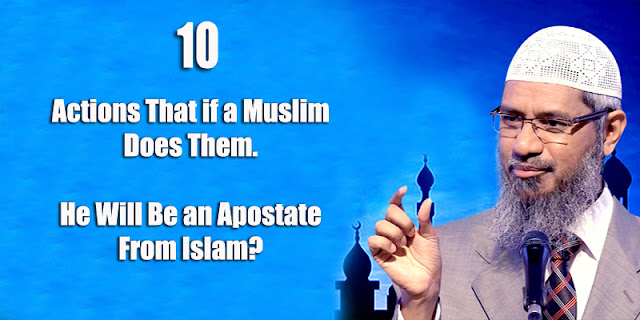 Note that Allah has commanded all people to enter Islam and to adhere to it and to beware of whatever is contrary to it. He sent His Prophet Muhammad (peace and blessings of Allah be upon him) to call mankind to that. He tells us that those who follow him will be guided and that those who turn away from him have gone astray. In many verses He warns against the means that lead to apostasy and all forms of shirk and kufr. The scholars (may Allah have mercy on them) have said, when discussing apostasy, that a Muslim may apostatize from his religion by doing many acts that nullify Islam, which makes it permissible to shed his blood and seize his wealth, and which will put him beyond the pale of Islam. Among the most serious and most common of these things are ten which were mentioned by Shaykh Muhammad ibn ‘Abd al-Wahhaab and other scholars (may Allah have mercy on them all). We will mention them in brief here, so that you and others can beware of them, in the hope that you will be safe and sound. We will also explain a little about them after mentioning each one.

1 – Shirk or associating others in worship with Allah. Allah says (interpretation of the meaning):

“Verily, Allah forgives not (the sin of) setting up partners (in worship) with Him, but He forgives whom He wills, sins other than that, and whoever sets up partners in worship with Allah, has indeed strayed far away”

“Verily, whosoever sets up partners (in worship) with Allah, then Allah has forbidden Paradise to him, and the Fire will be his abode”

That includes praying to the dead, seeking their help, making vows and offering sacrifices to them or to the jinn or to the grave.
2 – Whoever sets up intermediaries between himself and Allah, asks them to intercede, and puts his trust in them, is a kaafir according to scholarly consensus.

3 – Whoever does not regard the mushrikeen as kaafirs, or doubts that they are kaafirs, or regards their way as correct, is a kaafir.

4 – Whoever believes that anything other than the teaching of the Prophet (peace and blessings of Allah be upon him) is more complete than his teachings, or that the rulings of anyone else are better than his rulings – such as those who prefer the rule of false laws to his rulings – is a kaafir.

5 – Whoever hates any part of that which the Prophet (peace and blessings of Allah be upon him) brought, even if he acts in accordance with it, is a kaafir, because Allah says (interpretation of the meaning):

“That is because they hate that which Allah has sent down (this Qur’aan and Islamic laws); so He has made their deeds fruitless”

6 – Whoever makes fun of anything in the religion of the Prophet (peace and blessings of Allah be upon him), or makes fun of any texts that refer to rewards or punishments, is a kaafir. The evidence for that is the verse (interpretation of the meaning):

“Say: Was it at Allah, and His Ayaat (proofs, evidences, verses, lessons, signs, revelations, etc.) and His Messenger that you were mocking?

Make no excuse; you disbelieved after you had believed”

7 – Sihr (witchcraft) – including spells to turn one person against another or to make someone love another. Whoever does this or approves of it is a kaafir. The evidence for that is the verse (interpretation of the meaning):

“but neither of these two (angels) taught anyone (such things) till they had said, ‘We are for trial, so disbelieve not (by learning this magic from us)’”

[al-Baqarah 2:102]
8 – Supporting the mushrikeen and helping them against the Muslims. The evidence for that is the verse in which Allah says (interpretation of the meaning):

“O you who believe! Take not the Jews and the Christians as Awliyaa’ (friends, protectors, helpers), they are but Awliyaa’ of each other. And if any amongst you takes them (as Awliyaa’), then surely, he is one of them. Verily, Allah guides not those people who are the Zaalimoon (polytheists and wrongdoers and unjust)”

“And whoever seeks a religion other than Islam, it will never be accepted of him, and in the Hereafter he will be one of the losers”

10 – Turning away from the religion of Allah, not learning it and not acting in accordance with it. The evidence for that is the verse (interpretation of the meaning):

“And who does more wrong than he who is reminded of the Ayaat (proofs, evidences, verses, lessons, signs, revelations, etc.) of his Lord, then turns aside therefrom? Verily, We shall exact retribution from the Mujrimoon (criminals, disbelievers, polytheists, sinners)”

With regard to all of these acts that nullify Islam, it makes no difference whether a person is joking, serious or afraid, unless he is forced to do it. All of them are very serious, and they all happen a great deal. The Muslim should beware of them and fear falling into them. We seek refuge with Allah from the things that may incur His wrath and painful punishment. May Allah send blessings and peace upon the best of His creation, Muhammad, and upon his family and companions.
The fourth category includes those who believe that the systems and laws devised by men are better than the sharee’ah of Islam, or equal to it; or that it is permissible to refer to them for judgements and rulings, even if he believes that referring to sharee’ah is better; or that the Islamic system is not fit to be applied in the twentieth century; or that it was the cause of the Muslims’ backwardness; or that it should be limited to a person’s relationship with his Lord and not have anything to do with the other affairs of life.

The fourth category also includes those who think that carrying out the ruling of Allah by cutting off the hand of the thief or stoning the married adulterer is not appropriate in the modern age.

That also includes: everyone who believes that it is permissible to rule according to something other than the laws of Allah with regard to interactions, hudood punishments or other matters, even if he does not believe that that is better than the ruling of sharee’ah, because by doing so he is regarding as permissible something that Allah has forbidden according to consensus, and everyone who regards as permissible something that Allah has forbidden and is well known to be forbidden in Islam, such that no Muslim has any excuse for not knowing that it is forbidden, such as adultery, alcohol and riba, and ruling by something other than the sharee’ah of Allah, is a kaafir according to the consensus of the Muslims.

We ask Allah to help us all to do that which pleases Him, and to guide us and all the Muslims to His Straight Path, for He is All Hearing, Ever-Responsive. May Allah send blessings and peace upon our Prophet Muhammad and his family and companions.