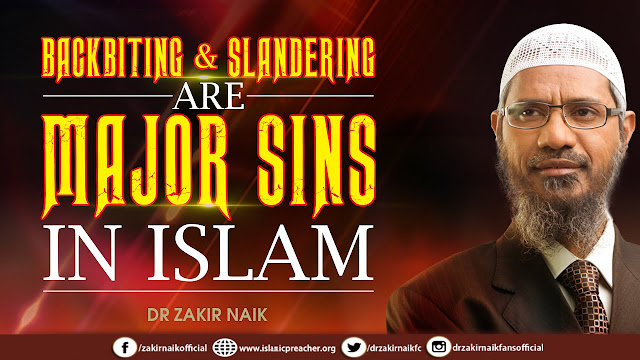 A commentary on one of the most destructive of major sins

Islam is a religion of peace, love and compassion. Lies, suspicion, back biting, slander and gossip are totally alien to Islam. In fact they are considered amongst the most destructive of major sins. This is so because these sins sow enmity and discord among the Muslim Ummah and lead to its destruction. They cause hostilities between people of the same household, and between neighbors, friends and relatives.

Islam demands that our relationship with mankind should be one of sincerity and responsibility. It should be one where we have respect for the honor, reputation and privacy of others. Islam teaches us that we are not only held accountable for our own attitudes and actions but also for anything else over which we have control or influence over, in our society or the world around us.

Verses: Let's see what the Quran states about backbiting and slander - This is the Book, in it is guidance sure, without doubt, to those who fear God. (2:2)

God has forbidden the believers from backbiting

O you who believe! Avoid much suspicion, in deeds some suspicions are sins. And spy not neither backbite one another. Would one of you like to eat the flesh of his dead brother? You would hate it (so hate backbiting). And fear God, verily, God is the one who accepts repentance, Most Merciful. (49: 12)

When we reflect deeply over this assimilation it should be enough to keep us away from backbiting!

Behold, you received it on your tongues, and said out of your mouths things which you had no knowledge; and you thought it to be a light matter, while it was most serious in the sight of God (24: 15)

Many of us back bite and gossip without thinking. We think it is minor matter, however God reminds us to be careful and even though we think we are doing something little it is in fact very big in the sight of God!

Many people are so busy spreading the slander they hear that they do not even stop to think if it is true or not.

Say to My servants that they should only say those things that are best, for Satan does sow dissensions among them, for Satan is to man an avowed enemy. (17:53)

Are we falling into Shaitan's (Satan's) trap? We can all analyze ourselves.

Hadiths: Let's see what Prophet Muhammad(pbuh) said about Backbiting in the hadiths. God states in the Quran - You have indeed in the Messenger of God an excellent pattern of conduct. (33:21)

The definition of Backbiting & Slander

Prophet Muhammad(pbuh) said :"Do you know what backbiting is?" They said, "God and His Messenger know best." He then said, "It is to say something about your brother that he would dislike." Someone asked him, "But what if what I say is true?" The Messenger of God
said, "If what you say about him is true, you are backbiting him, but if it is not true then you have slandered him." (Muslim)

Prophet Muhammad(pbuh) said : "Who protects his tongue from unlawful utterances and his private parts from illegal sexual intercourse, I shall guarantee him entrance into Paradise."(Bukhari and Muslim)

The definition of the best muslim

Deriding people in their presence by making negative facial expressions or by hand gestures while they are unaware is also a form of backbiting.

We need to beware of the slipping of our tongues

"When man wakes up in the morning each day, all parts of the body warn the tongue saying, ‘Fear God as regards us for we are at your mercy; if you are upright, we will be upright and if you are crooked, we become crooked.’" (At-Tirmidhee)

Backbiting and slander is so widespread that it has become the topic of people’s meetings and an avenue for expressing their anger, misgivings and jealousy. Those who indulge in backbiting are oblivious of the fact that they are only harming themselves. This is because of the fact that on the Day of Resurrection both the wrongdoer and the wronged will stand before God, Who is the Just Judge, God will then give this wronged person from the good deeds of the person who wronged him in accordance with his wrong by backbiting.

Islam teaches us that if people are being ridiculed or backbited in our presence, we should defend their honor. If we neglect this, we shall deprive ourselves of ever needed help and mercy from God - If a man's Muslim brother is slandered in his presence, and he is capable of defending him and does so, God will defend him in this world and in the next. But if he fails to defend him, God will destroy him in this world and the next. (Baghawi). What will we do the next time we are tempted to backbite or hear slander in our presence? Right now the choice is ours!

We ask God the Most High, the All Powerful, to teach us that which will benefit us, and to benefit us by that which we learn. May God grant blessings and peace to our Prophet Muhammad
and his family and companions. Peace and Blessings of God be upon him.