Why is Sujood (Prostration) So Important? 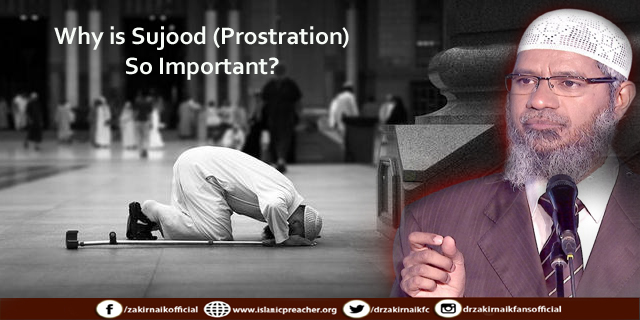 ONE IS NEAREST TO HIS LORD IN SUJOOD

Indeed sujood is one of the most beautiful, most special and most elevating acts of worship a believer can do to His Most High Creator.

We learn from the Prophetic sayings of The Last Messenger of Allah Muhammad (peace be upon him) that:

“A slave becomes nearest to his Lord when he is in prostration. So increase supplications while prostrating.” [Muslim]

So, this position is the nearest a believer can be to his/her lord.

ONE SUBMITS TO HIS LORD IN SUJOOD

This act of sujood achieves the utter physical submission one can do before the Creator. As The Messenger taught:

“When a person prostrates, seven parts of his body prostrate: his face, his two palms, his two knees and his two feet.” [Sahih Muslim]
In sujood, the person puts his most noble features (face and forehead) to the ground in an act of humility and submission, but Allah elevates him/her on account of that one degree.

He grants them rewards and omits their sins.

Thauban (May Allah be pleased with him) said: “I heard Messenger of Allah (peace be upon him) saying:

“Perform Sujood (i.e. in prayer) more often. For every prostration that you perform before Allah will raise your position one degree and will remit one of your sins“. [Muslim]

SUJOOD OPENS THE DOORS OF PARADISE

We also learn from Prophet Muhammad that this act of sujood (especially in prayer) is something that opens the doors of Paradise to the sincere humble seeker of his/her Lord.

“I used to live with the Messenger of Allah at night. I would bring water for his ablution and his need. He asked: Ask me. I said: Your company in Paradise. He said: Is there anything other than that ? I said: It is only that. He said: Help me for yourself by making prostrations abundantly.” [Sunan Abi Dawud]

And Allah Almighty says in His Noble Book and His Direct Speech in the Quran:

We also learn a very beautiful supplication that the Messenger of Allah (peace and blessings upon him) used to say while in prostration.

When the Messenger of Allah (peace be upon him) prostrated he would say:

May Allah grant us humility to do sujood with sincerity and earn the rewards and closeness to Him that come with this beautiful act of worship!