Why a Difficulty Can Be a Blessing 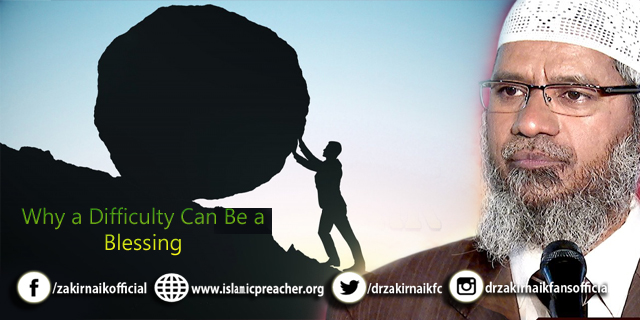 When we have a problem in life, Allah says, ‘don’t worry, with that difficulty there is easy.’

You will never know what ease is all about unless you’ve been through difficulty. Those who have a beautiful life, sometimes they are still worried and depressed because they don’t know what it is like to have suffered a little bit.

So, Allah makes us suffer slightly so that we appreciate our ease.

A man who’s always driven a Rolls Royce will never know what it’s like to ride a bicycle to work! Two ways of making him ride. One is when the doctor tells you you’re about to die and you need to ride to work! Immediately everything is given up. Why? Because we’re worried about dear life.

I’ve seen a man who had a carrot, and he was pretending like he’s smoking this carrot and nibbling on it. I told him:

“What made you nibble on this carrot?”

“My doctor told me I can’t smoke, and a good replacement is a carrot!”

You’re stuffing your mouth with a carrot because of a doctor, but when Allah told you smoking is bad then you didn’t want to listen.

So, whenever there is a person who has tasted goodness alone and they don’t know what difficulty is about, there comes a time when they do not appreciate what they have.
So many people have climbed the peak in terms of materialistic items and then they’ve dropped down the mountain. They say it’s easier to drop from the top than it is from the bottom.

When you’re right at the top, a small movement and you roll down; and when you’re at the bottom, they can kick you if you drop you stand up again in your walking same level, Mashallah!

It’s all about altitude.

So, remember sometimes Allah wants you to go down so that you appreciate the bicycle after you had nothing, yet ten years ago you had the Rolls Royce!

Some of the scholars of linguistics have analyzed the statement and they say “usr” is referring to the same difficulty and “yusr” because it is common is referring to a different point of ease.

May Allah alleviate the suffering that we are all going through in our own little ways.

Remember it’s a gift of Allah to keep you in check sometimes, to keep you calling out to Him.