Three Easy Ways to Raise Your Rank in Jannah 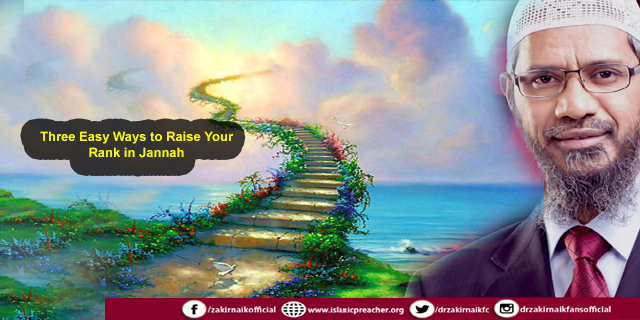 Imagine yourself in Jannah, just one level above your friend, yet the distance between the two of you is of that between the heavens and the earth. Yes! That is the difference between each level!

“In Paradise… what is between every two levels is like what is between the heavens and the earth. Al-Firdaus is its highest level, and from it the four rivers of Paradise are made to flow forth…” 1

Without a doubt, Jannah in its entirety, including the lowest level, is tremendously beautiful, so beautiful that with the limited capacity of our minds, we are unable to imagine what it would be like to be there. SubhanAllah, it is unfathomable! However, one does not enter it without paying its price.

Therefore, we must never be satisfied with our level of worship; rather, we must strive to better ourselves tirelessly, as it is our struggle in this life that will determine our final abode, and our endeavor that will determine our ranks in the Hereafter. For this, we must aim higher and work harder in order to deserve the highest of levels and greatest of rewards. This would mean following the example of the Sahaba small - radi-allahu-anhum, who never ceased to ask about the *best* ways to attain Allah’s pleasure. It is embodied in the type of questions they used to ask the Prophet saw, such as, what type of person will be the closest to you in the hereafter? What is best deed to Allah? What is the most beloved deed? It is this admirable determination of theirs that must compel us into imitating them, and along with continuous striving, we must consistently hope and ask Allah swt (1) to enter us into Janntul-Firdaws, as per the Hadith:

“I heard the Messenger of Allah say:’…If you ask of Allah, ask Him for Firdaws.'” 2
Do not hesitate in asking for the highest level, for Allah swt (1) is capable of everything, we must do our part too though.

This article will highlight three simple yet highly rewarding deeds that will, by the mercy of Allah elevate our ranks in Jannah:

It was narrated from Kathir bin Murrah (radiyallahu anhu) that Abu Fatimah told him:

“I said: ‘O Messenger of Allah! Tell me of a deed that I can adhere to and act upon.’ He said: “You should prostrate, for you will not prostrate to Allah but He will raise you in status one degree thereby and erase from you one sin.” 3

SubhanAllah, pondering on these ahadith shows us how merciful Allah is. One prostration, reflect upon this with me brothers and sisters, one prostration in this life raises one to a higher degree in Paradise, a degree that is in distance like that between the heavens and the earth! How can we forsake such an opportunity, it really is not difficult if we sincerely desire for our eternal abode to be Jannah.

A Practical Way to Implement This in Our Lives Would Be to Increase in Nawafil (Voluntary Prayers), Here Are Some Virtues of These Prayers:

* TAHJJUD (NIGHT PRAYER): Most beloved prayer to Allah after the obligatory.

Abu Hurairah (radiyallahu anhu) narrated that: Allah’s Messenger saw said: “The most virtuous fasting after the month of Ramadan is that of Allah’s month of Al-Muharram. And the most virtuous Salat after the obligatory is the night prayer.” 4
* Ad-Duha(forenoon prayer): Acts as a charity for the 360 joints in our bodies.

* Witr: Allah loves the witr prayer, and it is a sunnah mu’akkada.

Narrated Ali ibn AbuTalib (radiyallahu anhu): The Prophet saw said: Allah is single (witr) and loves what is single, so observe the witr, you who follow the Qur’an.

These are just some of them, and if we make it a habit to continually pray these nawafil we will not only be immensely rewarded, but will also be elevated in Jannah, in sha Allah.

“I used to bring to the Messenger of Allah saw water for wudu and serve him. He said: ‘Ask of me.’ I said: ‘I want to be with you in Paradise.’ He said: ‘Is there anything else?’ I said: ‘That is all.’ He said: ‘Help me to fulfill your wish by prostrating a great deal.'” 7 2) MEMORIZE VERSES FROM THE QUR’AN

Narrated ‘Abdullah bin ‘Amr (radiyallahu anhu) that the Prophet saw said: “It shall be said – meaning to the one who memorized the Qur’an – ‘Recite, and rise up, recite (melodiously) as you would recite in the world. For indeed your rank shall be at the last Ayah you recited.'” 8
If memorizing a few Juz’s from the Qur’an grants a Mu’min a higher rank in Jannah, then where will the one who has memorized the entire Qur’an be? Successful will they be indeed! It is one of the greatest acts that a believer can pursue in this dunya to draw closer to His Lord, and with every ayah they will be rising higher and higher in Jannah. It is without a doubt the dream of every Muslim to be with the Prophet saw in Jannah, so does this not motivate us to put in a greater effort in order to earn this privilege?

3) SEND PEACE AND BLESSINGS UPON THE PROPHET SAW

“The Messenger of Allah saw said: “Whoever sends salah upon me once, Allah will send salah upon him tenfold, and will erase ten sins from him, and will raise him ten degrees in status.” 9

SubhanAllah, saying the salwat only once gives us such an incredible reward, only imagine how heavy our scale of good deeds will be if we say more! Ten degrees in status just by repeating a statement sincerely in a couple of seconds, this is an opportunity we cannot forsake brothers and sisters. It does not require a tremendous effort and can be done in any time or place, even now while you are reading this, so let us promise ourselves to make it a habit and remind others of it as well.

May Allah enable us to implement these simple deeds and may He elevate our ranks in Jannah and make heavy our scale of good deeds, Ameen.

What are your thoughts about this article? Please share them in the comments section below.