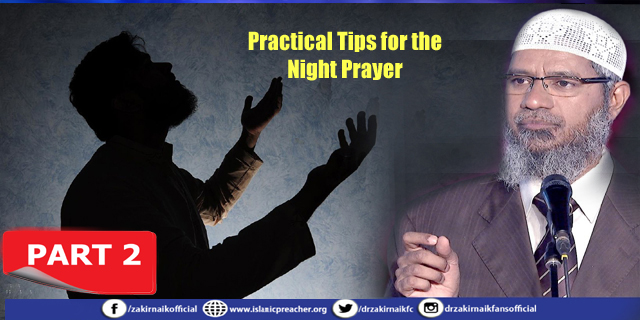 Did you enjoy Part 1 of this article? We hope so, here we look at more tips for performing Qiyaam-al-Layl.

4. Sleeping According to the Sunnah of Allah’s Messenger

(a) Sleep early: Sleeping early is a healthy habit and it was the practice of Allah’s Messenger (Peace and blessings be upon Him) to sleep directly after performing the Isha prayer.

(b) Sleep in a state of taharah (purity): Ibn Abbas (May Allah be pleased with him) reported that Allah’s Messenger (Peace and blessings be upon him) said: “Purify these bodies and Allah will purify you, for there is no slave who goes to sleep in a state of purity but an Angel spends the night with him, and every time he turns over, [the Angel] says, ‘O Allah! Forgive Your slave, for he went to bed in a state of purity.” [Reported by at-Tabaranee. See Saheeh al-Jamee (3831)]

(c) Choose a suitable bed: An excessively luxurious or soft bed provokes laziness and makes one sleep more and become negligent. Aa’ishah (May Allah be pleased with her) narrates that the pillow of the Prophet (Peace and blessings upon Him) on which he slept at night was made of leather stuffed with palm fibers. [Abu Dawood and Musnad Ahmad. Saheeh al-Jamee (4714)]

(d) Cleaning the bed and lying on the right side: Abu Hurayrah (May Allah be pleased with him) reported: The Prophet (Peace and blessings upon Him) said: “When any one of you goes to bed, let him clear his bed by hitting it with his garment, for he does not know what may have come onto it. Then let him lie down on his right side…” [Saheeh al-Bukharee and Saheeh Muslim]

(e) Reciting the adhkaar (supplications) mentioned in the sunnah before sleeping: There are a number of adhkaar prescribed in the sunnah before going to bed. Amongst them are reciting the last verses of Soorah al-Baqarah, reciting Soorah al-Falaq and Soorah al-Nas and Soorah Ikhlas and blowing in the palms and wiping as much of the body possible, starting from the head, face and then the front of the body doing it three times. [Bukhari and Muslim]

Ali Ibn Abi Talib (May Allah be pleased with him) reported that when the Prophet’s daughter, Fatima (May Allah be pleased with her) came to him and asked him for a servant, he (Peace and blessings upon Him) said to her and Ali: “Shall I not teach you something that will be better for you than a servant? When you go to bed, say ’SubhanAllah’ thirty-three times, ’Al-hamdulillah’ thirty-three times, and ’Allahu Akbar’ thirty-four times. This is better for you than a servant.” [Bukhari and Muslim]
5. Avoiding too much food and drink

Too much food or drink is one of the main obstacles that make one lazy and negligent of Qiyaam al-Layl. The Messenger of Allah (Peace and blessings upon Him) said: “Man fills no vessel worse than his stomach. It is sufficient for the son of Adam to have a few mouthfuls to give him the strength he needs. If he has to fill his stomach, then let him leave one-third for food, one-third for drink and one-third for air.”[Reported by at-Tirmidhee and Ibn Majah. Saheeh al-Jamee (5674)]

Striving against oneself to get up and pray and suppressing one’s desires bring about Allah’s help and His Pleasure for the slave.

The Prophet (Peace and blessings upon Him) said:“The Mujahid (one who strives in way of Allah) is the one who strives against his own self for the sake of Allah.” [Reported by al-Tirmidhee. See al-Saheehah (549)]

7. Rebuking one’s self for not praying

Qiyaam al-Layl is a great blessing from Allah, the Exalted, and He has placed in it numerous spiritual benefits and rewards for the believer. Therefore, one should rebuke one’s self, if he misses this great opportunity of achieving rewards and Pleasure of Allah.

Imam Ibn al-Qayyim (Rahimahullah) said: “If the slave is responsible and accountable for everything, even his hearing, sight and innermost thoughts, as Allah say, “…Verily, hearing, sight, and the heart of each of you will be questioned by Allah, [Soorah al-Isra (17): 36], then he should check on himself before he is brought to account.”