Islamic Inspirational Quotes to Get You Moving 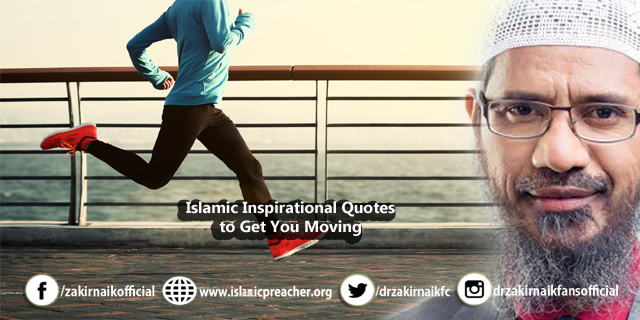 We all need nuggets of inspiration to keep us going and what better place to reach for this inspiration than Islam? While the well of knowledge in Islam is infinite, here we’ve collected some of the inspirational words that we love. Some of these treasures are from the Noble Qur’an, sayings of our beloved Prophet(pbuh), supplications, and from our modern Islamic scholars, philosophers, poets and artists. Enjoy and more importantly, be inspired! And don’t forget to add your own personal favorites in the comments section.

1.) “I asked Allah’s Messenger(pbuh) which deed was best.” He (the Holy Prophet) replied: “The prayer at its appointed hour”. [Sahih Muslim]

3.) The Prophet (pbuh) used to seek refuge in Allah from laziness that he used to mention it daily in this dua: “O Allah, I take refuge in You from anxiety and sorrow, weakness and laziness, miserliness and cowardice, the burden of debts and from being over powered by men.” [Sahih Bukhari]

4.) The Prophet (pbuh) said, “By Him in Whose Hand my life is, it is better for anyone of you to take a rope and cut the wood (from the forest) and carry it over his back and sell it (as a means of earning his living) rather than to ask a person for something and that person may give him or not.” [Sahih Bukhari]

5.) One of the greatest pieces of advice given by the Prophet (pbuh) was: “The most beloved actions to Allah are those performed consistently, even if they are few.” [Sahih Bukhari]
6.) “And whoever fears Allah – He will make for him a way out and will provide for him from where he does not expect. And whoever relies upon Allah – then He is sufficient for him. Indeed, Allah will accomplish His purpose. Allah has already set for everything a [decreed] extent.” [Qur’an, 65: 2-3]

7.) “Indeed, Allah will not change the condition of a people until they change what is in themselves.” [Qur’an, 13:11]

8.) “After asking Allah to guide you to the straight path, don’t just stand there … start walking!” – Albaz Poetry

9.) “Yesterday I was clever, so I wanted to change the world. Today I am wise, so I am changing myself.” – Rumi

11.) “Allah knows exactly what to give you to help you return to Him. The events in your life are purposeful, appropriate & non-random.” – Shaykh Hamza Yusuf

12.) “My sin burdened me heavily. But when I measured it against Your Grace, O Lord, Your forgiveness came out greater.” – Imam Shafii

13.) (Ibn al-Jawzi) To achieve any objective, we need two things:

16.) “And whoever fears Allah – He will make for him a way out and will provide for him from where he does not expect. And whoever relies upon Allah – then He is sufficient for him. Indeed, Allah will accomplish His purpose. Allah has already set for everything a [decreed] extent.” [Qur’an, 65: 2-3]

18.) Abu Yahya Suhaib b. Sinan said that the Prophet (pbuh) said: “No man fills a container worse than his stomach. A few morsels that keep his back upright are sufficient for him. If he has to, then he should keep one-third for food, one-third for drink and one-third for breathing.” [At-Tirmidhi]

19.) Anas reported that the Prophet (pbuh) said, “It a Muslim plants a tree or sows seeds, and then a bird, or a person or an animal eats from it, it is regarded as a charitable gift (sadaqah) for him.” [Sahih Bukhari]

20.) “There are two blessings which many people lose: (They are) health and free time for doing good.” [Sahih Bukhari]

23.) “Actions are by their intentions” [Sahih Bukhari and Muslim]

26.) “Meet the people in such a manner that if you die, they should weep for you, and if you live, they should long for you.” – Ali Ibn Abi Talib


27.) “If Allah puts anyone in the position of authority over the Muslims’ affairs and he secludes himself (from them), not fulfilling their needs, wants, and poverty, Allah will keep Himself away from him, not fulfilling his need, want, and poverty.” [Abu Dawud]

28.) The Prophet (pbuh) said, “If anyone fulfills his brother’s needs, Allah will fulfill his needs; if one relieves a Muslim of his troubles, Allah will relieve his troubles on the Day of Resurrection.” [Sahih Bukhari and Muslim]

29.) Abdullah ibn ‘Abbas reported that the Prophet (pbuh) said, “The believer is not he who eats his fill while his neighbor is hungry.” (Authenticated by Al-Albani, Al-Adab Al-Mufrad Al-Bukhari, Hadith 112)

30.) The Prophet (pbuh) said: “It is also charity to utter a good word.” [Sahih Bukhari and Muslim]