Battling The Nafs In The University Environment 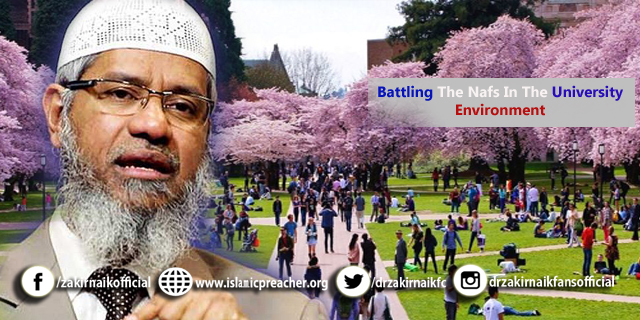 We live in a world full of temptations. It is a world that is full of tests and challenges. We find ourselves battling with our nafs (base desires) a lot while making decisions based on right and wrong. We constantly battle with choices of whether, in the societies that we live in, our beliefs will integrate well with the social norms. We find ourselves seeking answers to questions which at some point we never had to ask ourselves but, in modern society, such questions arise frequently. In a university environment, for instance, some of these, citing specific situations, are:

Consider a Muslim girl in a university environment. While interacting with other students, some of the questions she might ask herself will be:

“What do they think of me as a Muslim Female?”“What does my dressing say about me? Do they understand why I dress in the way that I do? Do I scare them away? Should I perhaps try to blend in by modifying my dress? Do they think I’m being oppressed?”
MashaAllah a lot of Muslim sisters have managed to stay strong in their observation of hijab in such instances – something which is truly commendable and admirable. May Allah continue to guide them and may He direct those that might have deflected back to the right path.


Another situation that arises at times is that of Muslim sisters choosing specific groupings among themselves based on their assumed levels of faith. You might find the sisters who can be considered to be more modest in their dress staying together, and those considered less modest in their dress staying together. You might also encounter the situation where one group alienates a sister trying to be friendly with them based on judgmental tendencies, with the underlying premises usually those such as:
“She is too religious, she will probably look down upon us.” –or-

“She doesn’t dress appropriately. What will people think of my character if I am seen with her? After all, they say birds of the same feather flock together, so we’ll have to be sharing some characters to be ‘flocking’ together .”

SubhanAllah, it is not our place to judge others, for we do not know what is in the hearts of others. Allah says in Surah Al-Qalam 68:7,

“The believers are naught else than brothers. Therefore make peace between your brethren and observe your duty to Allah that haply ye may obtain mercy.”

It is therefore best to leave judgement to Allah and to behave in a manner that others may want to emulate. May Allah guide us all along the straight path, ameen.

Now take the instance of a Muslim brother who undergoes the pressure of wanting to be accepted as being one of the ‘cool kids’ too, because then he will not sit alone in the lecture hall and be branded a ‘loner’. Some of the questions that may arise are those such as:

“What can I do to interact with the others and be accepted?”

“Some of the guys have invited me to hang out with them this weekend. Will they think of me as being anti-social if I don’t go? Alternatively, I could always go but I don’t have to drink with them, right?”

Once a brother yields to such pressure, he might find himself subjected to more pressure with more questions arising.

“Ok, so… now I’m sitting here with them, but I still feel alone. Is it perhaps because I’m not doing what they are doing? Maybe I can just drink a bit to fit in? When I go back home I can go back to being a good Muslim, but just for now, I need friends.”
SubhanAllah such situations do arise. We see Muslim brothers continuously being pulled into the clubbing scenes. Our brothers get drunk and in a quest to prove their ‘coolness’ drive dangerously on the roads in such drunken states. At some point some brothers realize they are heading in the wrong direction and, Alhamdulillah, they refrain from falling in too deep, whereas others unfortunately remain misdirected. May Allah guide us all back to the right path.

There are so many challenges that Muslim brothers encounter in institutions of higher education, especially in countries with smaller populations of Muslims or where Islam is not quite a favourite of the masses, usually resultant from unfortunate disasters which have unfortunately been associated with Islam.

At the end of the day, however, most people that stray usually don’t quite have a relaxed feeling in their hearts, especially those that have had religious education. There’s usually a feeling of guilt that haunts most within. Some bury it in an attempt to avoid the ever so hated feeling of regret. Some try to justify their actions in other ways, but for most, despite all that, that feeling of guilt never goes away.

To be fully and truly productive as a Muslim, it is best to find yourself entirely. It is better to understand who you are as an individual and to understand why you make the decisions that you do. Then it is important to identify with the best solutions that will help you to become a better Muslim, then you can find a beautiful feeling of peace which will, inshaAllah, make your days go better.

Temptations will always be there; Shaytan made it a mission to misdirect us from the right path as is seen in Surah Al-Hijr 15: 39:

“He (Iblis) said: My Lord, because thou has sent me astray, I verily shall adorn the path of error for them in the earth, and shall mislead them every one.”

It is not only one of the beautiful surahs of the Holy Qur’an that is delightful to recite because of the rhyming words at the end of each of its sentences, it is also such a powerful surah which one recites when seeking refuge in Allah from Shaytaan and the evil which he whispers in the hearts of mankind. To protect ourselves from this sworn misdirection which Shaytaan made his mission, it is good to recite surah An-Nasoften.

It is also very important to find pride in our religion.  We might have noticed, without paying much attention to it, how much we admire people – even those of other religions – who do the things they believe in with such zeal and commitment. They do not compromise in order to please mankind over God. This should be the case with each of us, inshaAllah. Let us strive to truly follow Islam fully and to leave no room for regrets; a productive Muslim is one who leaves no room for regrets at a later stage. Regrets only waste one’s time, and wasting of time should really not be an option.
That said, in the university environment, some of the things that a Muslim student can do to battle the mis-directions of the nafs are:

Believe in yourself and your character. Allah will guide you to people who will accept you for your true self just as he will guide them to you.

Do not get into people’s minds and start thinking for them. You cannot possibly know what they are thinking until they say it or act it. So always assume the best or don’t assume at all.

Respect yourself and respect your deen. Such kind of respect earns you respect from society too. People see commitment which shows them that when assigned a specific task, you are more likely to approach it with commendable commitment than people who deflect from what they know to be better for them.

Be accepting of your Muslim brothers and sisters and refrain from judging them. We all have things that we can learn from each other. You can be the one that inspires someone else to become a better person.

Before doing anything ask yourself why you are doing it. If it feels wrong yet your heart seems to be strongly inclined towards doing it, say “ A’udhu Billahi min ash-shaytaan-ir-rajeem (I seek refuge in Allah from Satan, the rejected one)”. Say a silent dua and ask for guidance and strength. Find strength in knowing that Allah will be pleased with you if you refrain from doing wrong.

“And as for those who believe and do good works, We shall remit from them their evil deeds and shall repay them the best that they did. ” Surah Al-Ankabut 29:7.