AN EXCELLENT DUA FOR THIS LIFE AND THE HEREAFTER 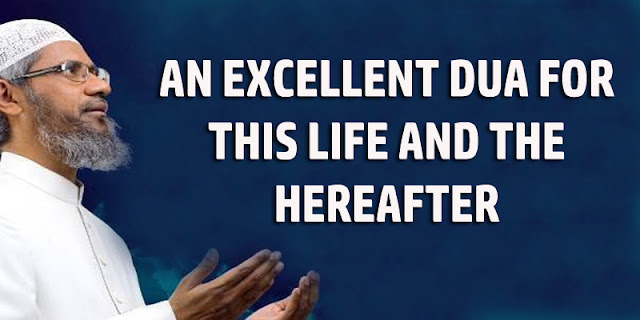 This is one of the Duas that most Muslims recite daily in their prayers and outside their prayers. This Dua is not only mentioned in the Quran but Prophet Muhammad (S.A.W.S.) advised us of the many merits of this Dua.

Ibn Al-Kathir also mentions in his tafsir that the Sunnah encourages us reciting this Dua (i.e., in the Ayah about gaining a good deed in this life and the Hereafter). Al-Bukhari reported that Anas bin Malik narrated that the Prophet used to say:

The Quran states it in the following verse:

Ibn Al-Kathir states that the supplication mentioned and praised in the verse includes all good aspects of this life and seeks refuge from all types of evil. The good of this life concerns every material request of well-being, spacious dwelling, pleasing mates, sufficient provision, beneficial knowledge, good profession or deeds, comfortable means of transportation and good praise, all of which the scholars of Tafsir have mentioned regarding this subject. All of these are but a part of the good that is sought in this life. As for the good of the Hereafter, the best of this includes acquiring Paradise, which also means acquiring safety from the greatest horror at the gathering place. It also refers to being questioned lightly and the other favors in the Hereafter.

As for acquiring safety from the Fire, it includes being directed to what leads to this good end in this world, such as avoiding the prohibitions, sins of all kinds and doubtful matters.

(All praise is due to Allah! You cannot bear it -or stand it-. You should have said: (Our Lord! Give us in this world that which is good and in the Hereafter that which is good, and save us from the torment of the Fire!))

The man began reciting this Dua and he was cured.” [Sahih Muslim also recorded it.]

In conclusion, as mentioned by Al-Qasim bin `Abdur-Rahman above, let us strive to have a grateful heart, a remembering tongue and a patient body.