Why It's Important for Muslims to Volunteer 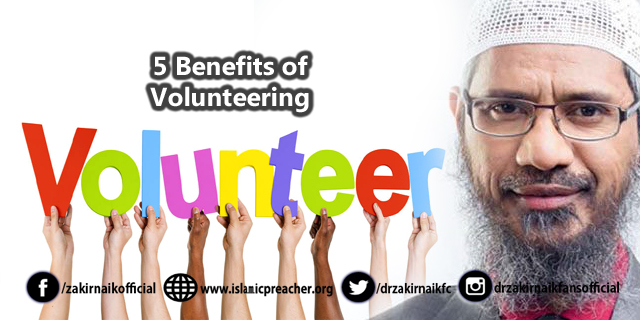 1. Causes you to be organised

Like the Prophet(pbuh), the serious volunteer is someone who has little time to waste. They want to be able to fit in as much time as possible doing work for the sake of Allah, whether it be raising money for the orphans and needy children or helping at their local mosque. They realise that the more organised and efficient they are, the more time they can spend raising money and not just concentrating on themselves. They can’t afford to leave things to the last minute. They need to have things planned, schedules in place, deadlines met so that they can maximize the number of those precious hours for the sake of Allah.

It is only when you open the doors to constructive criticism, that you are able to make changes that allow you to be the best volunteer you can possibly be and make changes that benefit others. For instance, Charity Week publishes a detailed warts-and-all Annual Report that includes what percentage of the money donated was banked and where every penny was spent. Keeping detailed accounts – for any organization – is not just a commitment to transparency that encourage us, but a realisation that true self-improvement can only take place after self-assessment. We aim to be our own harshest critic and strongest competitor.
3. Promotes competition in the good

When the Prophet (pbuh) was asked whether the verse in the Quran,

“And those who give whatever they (have to) give while their hearts are trembling” referred to people who committed sins, he replied: “No. They are those who fast, pray, and give charity whilst fearing that (these deeds) may not be accepted (by Allah). They are those who compete with one another in good deeds”[Bukhari].

There’s nothing like friendly competition to encourage people. The Prophet(pbuh) knew this and utilised it himself to great effect in the battle of Hunain and during other occasions throughout his life. We should encourage Muslims to compete with each other in a way that encourages excellence whilst still fostering brotherhood. Each institution and each person must be motivated to do better, work harder, and sleep less so that they can be at the forefront of helping others.

4. Is the best motivation

“The Prophet(pbuh) said,‘I and an orphan’s guardian, whether he is a relative or a non-relative, will be like these two in the Garden,’ and then the transmitter indicated the index and middle fingers”[Sahih Muslim].

Even the best of us can find our desire to gain more productive habits is hard to maintain 24/7. This is because, although we understand the benefits that accrue from being productive, they are essentially centred around ourselves. If the motivation was centred around other people then suddenly the effort intensifies. A father will be able to tolerate much hardship but cannot bear to see his son do so for even a second. For example, which of these scenarios would you be more motivated for: 1) If I ask you to lose 5kg of weight so that you can be more healthy, or 2) If I ask you to lose 5kg of weight because if you don’t, you cannot provide bone marrow for your unwell younger brother? In the former you will find a hundred excuses, but in the second you would do within two weeks. Similarly, volunteer work shifts the focus from us as individuals to us as an Ummah. Each second of being unproductive means that someone out there is suffering when we could have helped.
5. Provides a vision

“Ali said,’Judge as you used to judge, for I hate differences (and I do my best) till the people unite as one group, or I die as my companions have died'”[Bukhari].

Productivity is pointless unless it is pointed in the right direction and there is a vision to your actions. Whilst being productive and organised is important, the ultimate importance is given to the vision, or end goal. At Charity Week for example, the vision is uniting the Muslim youth upon Islam; and strengthening the ummah is noble goal for any organisation. Your own vision should be pushed relentlessly at every level, every meeting, and every minute. We must continually remind ourselves that we have a goal, and that goal is achievable and a necessity if the Ummah is going to become united once more. It is the vision that keeps us awake when others sleep, that keeps us going when others stop and that keeps us together when others fall apart. To be truly productive, we must make our every movement, decision and step in accordance with achieving the vision. And when we get this right, the barakah of Allah pours forth like the heavy rain on a barren plain.

In conclusion, the best way to become a truly productive Muslim is to work continually for the creation of a productive (and united) Muslim Ummah. May Allah grant us this and His pleasure. Ameen.